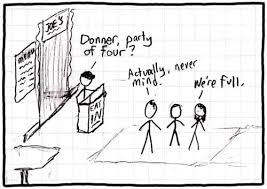 "What we're seeing in the Republican Party is that they invited the Tea Party in and it's turning into the Donner Party, in some instances, because they're turning the energy and the ferocity against each other," said Kaine in response to a question by the Huffington Post, referring to the infamous group of 19th-century American pioneers who eventually had to turn to cannibalism to survive. He added that the divisions have given Democrats "some great opportunities in races that we wouldn't have absent the Tea Party candidates."

Meanwhile, Rep. Debbie Wasserman Schultz warns, "it's very clear that if [Republicans] can't shut down the government, they'll do everything they can to just shut down essential government services that are the lifeblood of what people need right now." I'd just add that if Republicans take over the House of Representatives, they'll not only shut down the government, they'll launch witch hunts against President Obama just like they did against President Clinton in the 1990s. Do you want to prevent that from happening?  Good, then get involved now and encourage everyone you know to get involved. If we can close this ridiculous "enthusiasm gap," we win. If not, we all lose. Unless, of course, you're a big fan of "Donner party" politics. Heh.

Kaine: “If you want to fight deficits, don’t put the Republicans...

Kaine is exactly right, if you want to do something about the deficit, the last thing you want to do is vote Republican.  Oh, and here's what Republicans will blow the budget on - an average tax cut of $103,835 for taxpayers earning $1 million per year or more. Nice.

This wouldn't be a controversy if it was a proposal to build a synagogue or a church. We see an awful lot of Republicans going out and saying we gotta respect the Constitution -and that means we gotta respect it. We can't tarnish people's First Amendment rights.

Tim Kaine's on a roll today!

Kaine said he did not know how long he would stay on at the DNC, or what might lie ahead for his career. He said he had anticipated entering the administration in some type of education post before being asked to run party headquarters.

"This is only the beginning for Tim Kaine," said [Rep. Debbie] Wasserman Schultz. "I'm hopeful that he'll one day run for something again."

"He certainly has a fan base in New Hampshire, if he chooses to do that," Buckley said.

UPDATE: Just to be clear, this post is in no way an endorsement of Tim Kaine for President. In fact, I find it hard to believe that I'd ever support Kaine for President, Governor, or any other office at this point. I mean, you never know, but after watching him cave to Dominion, Bechtel, etc. from 2006 to 2010, I really really doubt it.

I strongly agree with Tim Kaine on this one.

In an interview with The Hill, Kaine said House Democrats who do not run with Obama's agenda risk alienating their most energetic supporters.

"If you distance yourself from the president, you can pour cold water on the excitement about what he is doing," said Kaine, who alluded to Democrat Creigh Deeds's problems.

Deeds lost a special election in Kaine's home state of Virginia last year after distancing himself from Obama, who had won Virginia's electoral votes in the presidential context just a year earlier.

"I can tell you this. Everywhere I go, every last community I visit, there are energetic supporters of this president who are excited about what he is doing," Kaine said.

Along these lines, I think this story is relevant. The bottom line is that most Democrats who are going to lose this November are moderate-to-conservative "blue dogs" in the 49 districts carried by John McCain. The vast majority of Democrats "from the Democratic wing" of the party are going to be re-elected. So, the question is, does it help the "blue dogs" to avoid appearing with - or not mentioning - President Obama? I'd argue strongly "no," in that the "blue dogs" aren't going to win any Republicans or Tea Partiers to their sides, regardless, yet by dissing Obama they're going to reduce enthusiasm among the Democratic "base."  In other words, it's a "lose-lose" for Democrats in swing districts to stay away from Obama.  Don't believe me? Just ask Creigh Deeds how refusing to say he was an "Obama Democrat" worked out for him.

UPDATE: This is stupid too.

Tim Kaine on Appropriate Biking Gear for a 51-Year-Old

Does this video make you want to take a bike ride on a Virginia trail this weekend? Does it make you want to wear spandex, or do you prefer something "more appropriate for a 51 year old?" :)  If either of those is the case, then you might have something in common with former Governor Tim Kaine, interviewed here by "Car Less Brit" for the Star City Harbinger (not sure where the website is, but I found the Facebook page) as he pedals along the Roanoke River Greenway. Whether in spandex or not, this looks a lot more relaxing than debating Michael Steele, that's for sure! I thought you all would enjoy a look at Virginia's official Recovery Act state website. Apparently, it hasn't been updated since January, when Tim Kaine was still Governor, even though a lot of recovery funding is still coming to the state. I'll leave it to all of you to interpret why this might be...

Kaine on Kasich: “The perspective of a Lehman Bros consultant”