Katie Couric – “While at the Milken Conference in Los Angeles, I caught up with Gov. McAuliffe to discuss Trump’s first 100 days in office, the 2016 election and the state of the [D]emocratic party moving forward, and whether or not a run for president may be in his future.”

McAuliffe has some interesting comments about the Clinton campaign, how he would have locked down the “blue wall” and not gone into Georgia, Texas, etc. Also check out his comments on the Clinton campaign’s overreliance on data and analytics, focus groups, anti-Trump messaging, etc.

Weirdest comment of the interview: McAuliffe says Trump gets a “gentleman’s C” for his first 100 days. Clearly, that’s absurd; if Trump doesn’t get an “F” for his disastrous first 100 days, then there’s no such thing as an “F” grade. The other thing that’s ridiculous about McAuliffe’s “gentleman’s C” is his comments after his grade, destroying Trump on issue after issue.

Another interesting quote on whether Dorothy McAuliffe running for Congress constituted “nepotism in politics”: “I don’t think it’s nepotism, I’d love it if Dorothy ran…Listen, I’m old as dirt, I think it’s time for some new people…I think it would be great if my wife ran; she’s got to make that decision…I don’t think the [last] names matter, I think it’s what you stand for. If you look at Dorothy today — 8 million more meals served to needy children in Virginia because of Dorothy’s efforts, the work she has done on our military active duty, the military child identifier bill, what she has done for our veterans. Don’t negate someone just because [of] their last name. I don’t care what your last name is. What have you done and what are you going to do for me? I don’t care if everybody has the [same last name]. Who cares? What are you going to do for me and I’d like to see your track record and then let voters decide. People got to run on issues and what you stand for. So I’m fine with that. I don’t know if she’s going to do it. I’d love her to do it. We have five children, still two young ones with us. So, she’s got to balance that issue of a mother and the other needs that go on…She’s been spectacular as first lady of Virginia.” 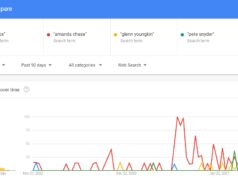