Congratulations to Melanie Meren – who I endorsed on April 1 (no April Fool’s joke! LOL) – for winning the Democratic endorsement for Fairfax County School Board from the Hunter Mill District Democratic Committee a few minutes ago. I don’t have the exact vote count, but I hear she won with around 80% of the vote [UPDATE: the final vote tally was 109-27]. Impressive!

See below for video of FCDC Chair Dan Lagana announcing the results, thanking incumbent Pat Hynes for her service, and also thanking Andy Sigle for running. BTW, I’m happy to say that with Meren’s win, I’m now four for four on my Fairfax County School Board endorsements: Karl Frisch (Providence District); Ricardy Anderson (Mason District); Laura Jane Cohen (Springfield District); and now Meren in Hunter Mill (note: Stella Kakissis Pekarsky was unopposed in Sully District, as is Elaine Tholen in Dranesville District). I’m also happy to say that the School Board appears to be really shaping up as an excellent one, with this influx of new talent and energy!

P.S. Coming up, on May 21, will be the Fairfax County Democratic Committee’s endorsement meeting for at-large School Board candidates, with four candidates (Ilryong Moon, Abrara Omeish, Rachna Sizemore Heizer, Karen Keys-Gamarra) running for three slots. Should be interesting! 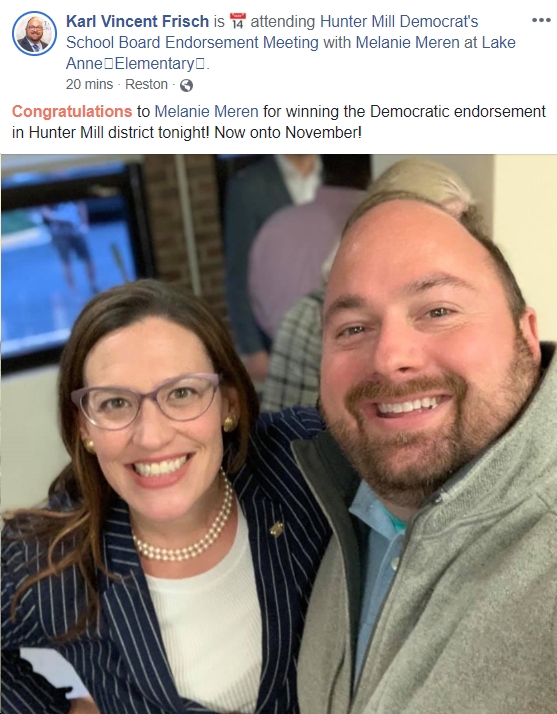 Speaking of Ronny Jackson endorsing the VA10 GOP(Q) nominee, check out the latest news on him. As @NormOrnstein puts it, "Ronny is not just a pill-pushing quack, a radical, a serial liar, and a seditionist. He is also thoroughly corrupt!" https://bluevirginia.us/2022/05/dpva-swamp-backed-anti-abortion-radical-wins-republican-nomination-for-va-10#comment-5865993547 cc: @vademocrats

Two points: 1) VA08 is an overwhelmingly blue district, s there's ZERO chance Lipsman will be elected; 2) Lipsman said "Fauci should be jailed, we all know that" & the VA GOP appears a-ok with that extremism... https://bluevirginia.us/2022/05/monday-news-australia-voted-for-climate-action-america-should-do-the-same-biden-launches-indo-pacific-trade-deal-warns-over-inflation-the-supreme-court-is-on-the-brink-of-disaster#comment-5865984726 cc: @arlingtondems @FairfaxDems @AlexVADems