First, check this out, courtesy of Bryan Scrafford, from last night’s Springfield District forum, in which Schultz responded as follows to a question on students getting vaccinated:

“The biggest problem is that we’re accepting students from around the world and they are entering into our schools without vaccinations right now and we’re having to pay for catching them up…So I think there’s a public health crisis and we’ve had a number of them…it’s a frightening prospect when we have these and we have to do outreach to communities to resolve some very very serious problems about health exposure to students who are already in schools.”

WTF? That’s the “biggest problem” facing Fairfax County schools?!? And why would it be a “frightening prospect” to do “outreach to communities?” And why, as Bryan Scrafford writes, would Schultz be so “quick to jump at an opportunity to use a page from Trump’s playbook and attack immigrants while answering a completely unrelated question?”

Of course, this is the same Elizabeth Schultz who recently unleashed an unhinged tirade against Beto O’Rourke, George Soros, “Liz” Warren, the “One Fairfax” policy, “globalism,” “socialism,” Saul Alinsky, Rachel Maddow, etc, etc. This is also the same Elizabeth Schultz who claimed she was being “bullied mercilessly,” who appeared with far-right extremist Sebastian Gorka to rant about “radicals who believe in identity politics” and to complain that “we can no longer have a Eurocentric history.”

Also, gotta love this idiocy, in which Schultz “claimed she needs a $600,000 annual budget and 8 political staffers to send an email.” As Independent candidate Kyle McDaniel puts it, “Crazy, right?!” Uh, yep! On 11/5, fortunately, voters have a chance to get Schultz the hell OUTTA there, by instead voting for Democrat Laura Jane Cohen. Just six more days… 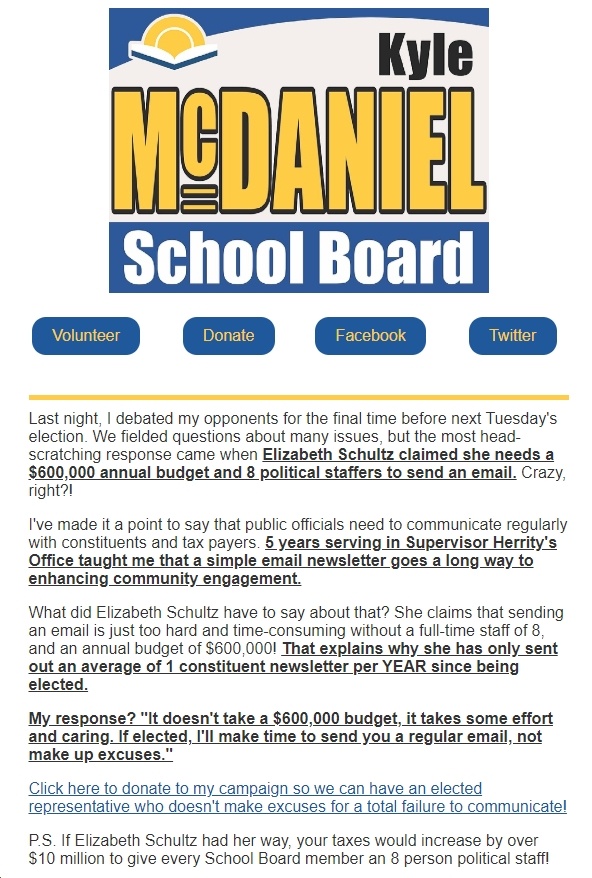