For far too long, the Washington Post‘s editorial page has demonstrated a shallowness about Virginia that has been jaw-droppingly painful at times.  As a 10th District resident, the Post’s 2016 endorsement of life-long conservative operator and last-term-in-office Trump-enabler Barbara Comstock remains the poster-child of The Post‘s editorial board’s failure to grok Virginia.

When it comes to Virginia, the (Com)Post struck again this morning, with a poorly thought-through call for the legislature to vote for a deeply flawed constitutional Amendment because, well, much better to seem to be doing something (even if poorly structured and risky for democracy) than to create an appearance of doing nothing by calling a time-out so that we can do something right.

Of course, this is referring to The Post‘s misguided advocacy for the “piss-poor” redistricting Amendment.

The quick reminder of what at play in the legislative session’s last hours. 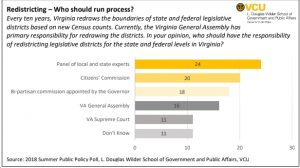 Recognizing the problems inherent in and risks of this structure, an alternative is in play: legislate for a nonpartisan process for the coming post-census redistricting, while working on a less-vulnerable-to-political-gamesmanship Constitutional Amendment to guide the process for the decades to come.

Though The Post recognizes this Amendment is “imperfect,” it attacks “Virginia Democrats” who seek to avoid locking into the Constitution a seriously “imperfect” process and who are offering up much stronger “anti-political bias” non-partisan processes as engaged in “political opportunism.”

The Post‘s editorial board’s perspective on the redistricting Amendment is painfully shallow thinking when it comes to Virginia and, more broadly, when it comes to remediating serious problems with American democracy.