According to VAPLAN – and to the observations of anyone who’s watched him over the years – Del. Dave LaRock (R) is one of the most extreme right, not to mention craziest, members of the Virginia General Assembly. For some background on this guy, see Faaaar-Right, Rabidly Anti-LGBTQ Del. Dave LaRock (R-HD33) Promotes Dangerous Petition Claiming Transgender Equality Would “Endanger Our Children!”; Virginia Del. Dave LaRock (Faaaar-Right R) Says Being Transgender a “Social Contagion,” Like Anorexia; Gets Pounded on His Facebook Page,  Rabidly Anti-LGBT Virginia Delegate Dave LaRock Absurdly Claims Loudoun County School Board “Lurches Left” Because It Opposes Discrimination, Supports Public Schools, Dave LaRock Spews Anti-LGBTQ Hate Straight From the House of Delegates and Talking to My Delegate: Dave LaRock (in which LaRock talked about how “beautiful” discredited/harmful gay “conversion therapy” is; refused to call Danica Roem “she”; etc.).

Given all that, it’s a pretty good rule of thumb that whatever this guy advocates, we should do the *exact opposite*.  So now, the hard-right, anti-government, anti-environment LaRock has written to Gov. Ralph Northam, using the COVID-19 crisis to ask for…yep, you guessed it, slashing spending, rolling back progressive labor legislation (e.g., the minimum wage, collective bargaining) and new clean energy/enviro laws (e.g., the Virginia Clean Economy Act). In other words – and I know this is shocking, lol – LaRock wants to use the current crisis to undo the results of the November 2019 elections, when Democrats took back control of the House of Delegates and State Senate, and also to undo some of the major accomplishments of the historic, progressive 2020 Virginia General Assembly session. Shweeeet, eh?

Now, clearly, some spending cuts are going to be necessary, given a sharp decline in revenues plus a sharp increase in unemployment and healthcare expenses, and of course given that Virginia has to balance its budget. But what conceivable reason would there be to roll back legislation that has no particular budgetary impact? For instance, if Virginia was better off moving to cleaner energy – which of course we are, both environmentally and economically – before Coronavirus, why wouldn’t we continue to be better off now? And if Virginia pre-COVID19 was better off raising the minimum wage for workers, thus putting more money in their pockets when they badly need it, why wouldn’t we be still be better off doing that today? Same thing with allowing localities to impose a tax on disposable plastic bags, which are an environmental disaster, and the other legislation listed by LaRock. At worst, we should be talking about *possibly* delaying the enactment of specific pieces of legislation, but ONLY IF there’s good reason to do so, and certainly NOT because some far-right delegate wants to use the Coronavirus crisis to push the extreme agenda he’s been dying for years to enact. 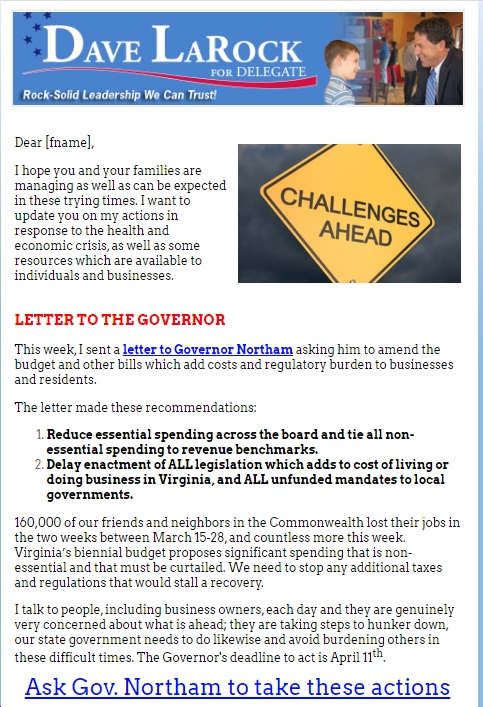 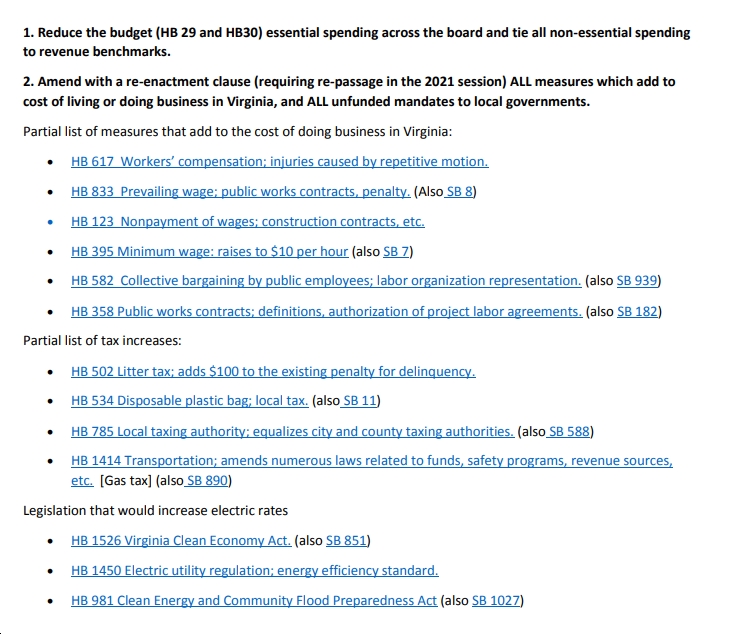