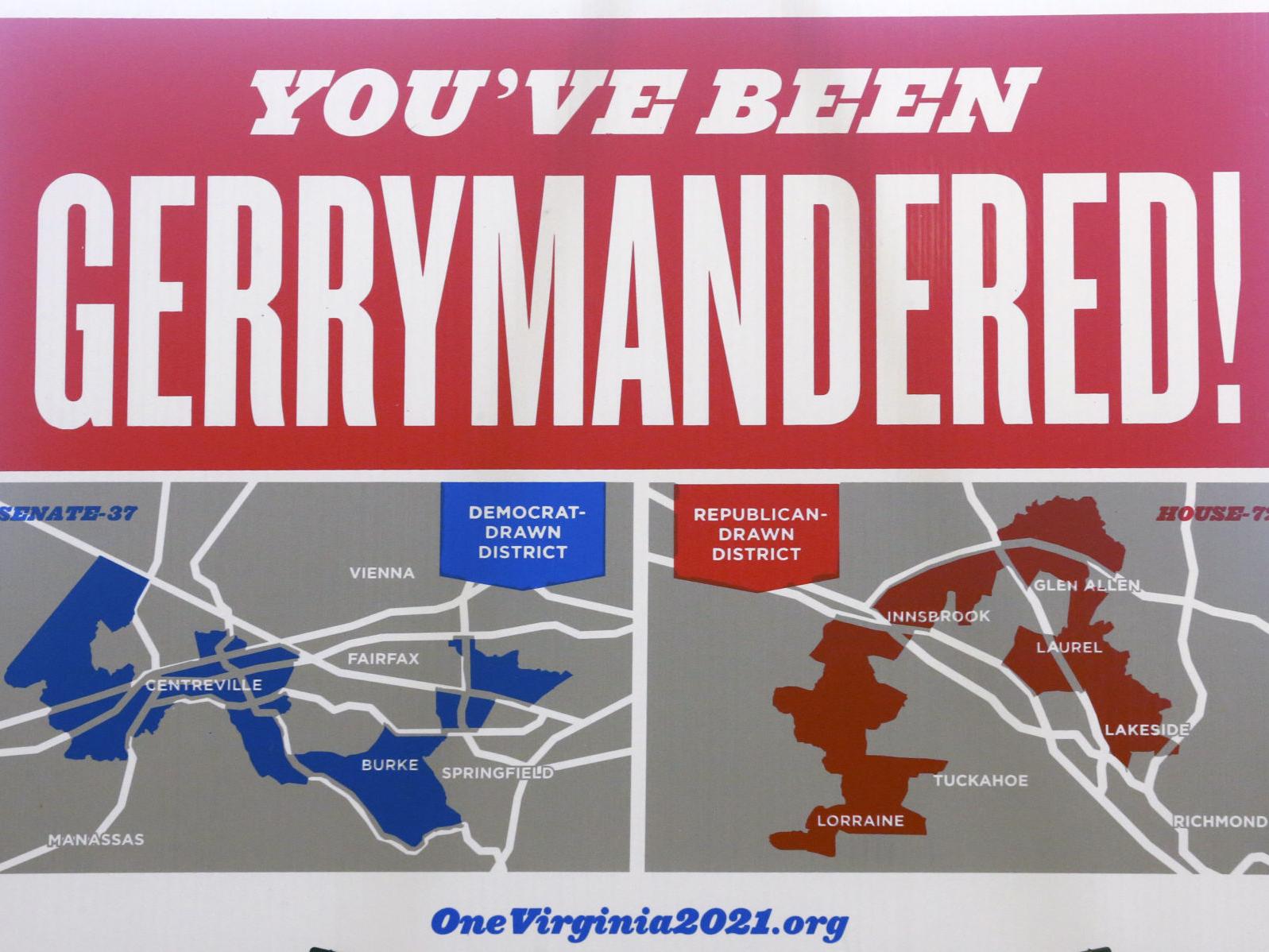 There’s been an increasing amount of chatter now that people are waking up to the bill of goods sold to them for the November redistricting referendum. The gist of the matter is that Virginians ceded their future to an unelected used car salesman. Everybody supports nonpartisan redistricting, but the redistricting referendum is by no stretch of the imagination nonpartisan. The bait and switch referendum enshrines partisan redistricting in the Virginia Constitution: politicians remain in charge and political deals will be cut of the sort that gerrymandered the Virginia Senate for both Democrats and Republicans in 2011.

Delegate Mark Levine has been shouting warnings from the rooftops. Groups including DPVA and FCDC have overwhelmingly passed resolutions opposing the referendum. In this morning’s column, Jeff Schapiro writes that it is a tough uphill battle: Doris Crouse-Mays notes that the AFL-CIO (and others) helped beat the right to work amendment after two years of organizing, but supporters of true nonpartisan redistricting are 100 days from November, with no organization, leadership, or plan.

I was intrigued by strategist and Lieutenant Governor candidate Paul Goldman’s piece on Blue Virginia a few days ago. Goldman masterminded Doug Wilder’s campaign that Larry Sabato gave a 1 in 100 chance of winning and was party chair when Wilder ensured fair redistricting for Black voters in 1991. In Richmond, Goldman organized a 2017 referendum to support public schools and oppose the Dominion Coliseum scam, which seemed a fait accompli when it was announced but was ultimately defeated. Some people are surprised he’s still alive, but he’s an interesting and insightful guy. I asked for an interview to see what he thought of the chances of defeating the redistricting referendum.

Do you support nonpartisan redistricting?

Absolutely. We’ve reached the point where we shouldn’t have the same legislative gerrymandering that we’ve had in this country for two hundred years. You have to realize that even if you have the power to do it, the public interest comes first. The public interest is in nonpartisan redistricting.

You were intimately involved with redistricting in 1991. How did that play out?

I was party chair in 1991 when we controlled the General Assembly and the governorship. The House took it seriously, but the Senate wanted to maintain their districts and drew lines that had only two majority-minority districts. As fairness dictated it, there should be five majority-minority districts. The Democratic Senate leadership didn’t like that because that would take away votes from their districts. The Governor led on that and I supported him. It was the right and just thing to do, and I think history shows it was the right thing.

Why do you think this is an unfair referendum?

The language of the referendum is misleading; it doesn’t accurately reflect the constitutional amendment. When you amend the City Charter in Richmond, you have to have the full language of the amendment on the ballot, word for word. I’ve done it a couple times. People always object, the registrar…well, that’s what the law says. One reason the law says that is there can be no doubt what you’re voting for. Voters can read it, take their time, vote for or against it.

But with this referendum, voters have to go on LIS and read the full text of the constitutional amendment before they go to their polling station. How many people even know where to find LIS? Yes, they will have a 500-word explanation the General Assembly approves, but how many people can understand that? It’s complicated.

But what the General Assembly is saying now is, ‘Mr. and Mrs. Virginia: We want you to vote for a constitutional amendment that makes redistricting nonpartisan, eliminates gerrymandering, and is great. But you’re going to have to take our word for that, because all we’re going to show you is the referendum language, not the actual language.’ You have no idea whether that’s true or not and just have to trust the General Assembly. In this case, it’s not true.

This can have long-lasting consequences. In 1970, people thought they were voting for a constitutional amendment that gave all children in Virginia equal educational opportunity and that satisfied Brown v. Board. Voters were sold a bill of goods. You had to be a skilled lawyer to understand they put in one word – “seek” – so that what the politicians were saying wasn’t true: the constitutional amendment did not guarantee equal educational opportunity, and that failure plagues us to this day.

Let’s look at this amendment’s language and one word: “citizens.” The redistricting commission would be made of eight legislators and eight citizens. I’ve tried it out on enough people to know that the average person thinks that the word “citizen” means just an ordinary person and not some politician, donor, or lobbyist. Finally, they think, no more backroom deals, and ordinary citizens will have an equal say. That’s a great story. And that’s what the other side is essentially saying. But it’s not true. Why not?

“Citizen” is not defined. There’s nothing that says that the citizens have to be independent, not donors, not lobbyists. They could be eight members of the General Assembly that were just voted out. They could be the top leadership of the Democratic and Republican Parties. The sixteen people could be the sixteen most partisan people in the state. How is that nonpartisan?

This is not how other states do it. New Jersey set up a redistricting commission, and they defined what an independent member is.

The referendum language also implies that the Virginia Supreme Court has the final say. That’s not true. The Justice Department and federal courts always have the final say. We inevitably see lines get tied up in federal litigation. They’re misleading people on that.

Furthermore, unlike the New Jersey law, there’s no funding mechanism. There’s nothing to stop the General Assembly from shortchanging the commission.

I call this referendum language “misleading” to be nice: it’s a bait and switch.

What’s a good strategy for defeating the redistricting referendum?

First you have to acknowledge the lay of the land. 72 to 17 in a recent poll, which makes sense to me. Why would anybody not say they were for nonpartisan redistricting? It’s almost a rhetorical question. But they just know what they hear, they haven’t read the amendment or seen the language of the referendum. If you read the amendment, it has nothing to do with what people want. Still, 72 percent in the polls plus maybe 70 percent approval ratings 100 days out, that’s tough.

You also know that the Democrats in the General Assembly who voted for it last year realized the bill of goods and tried to stop it, but it wasn’t enough.

The first thing you have to focus on is the language doesn’t accurately reflect the constitutional amendment – purposely so. You have a lot of people, newspapers, blogs, podcasts that are very interested in what’s going to happen in the special session beginning August 18, which will be the last time the General Assembly can do anything about the referendum language.

In my experience, very few people actually read the constitutional amendment. They’ll see some articles in the paper, maybe, but they don’t really focus on it until they’re in the voting booth or maybe a week before. So we’re fortunate that we can try to focus on the wording of the referendum language before it’s on the ballot, which is very key.

Secondly, you’ll have to form some sort of organization that will let people around the state know what you’re doing. Informing people in articles is important, but it doesn’t take very many people to do that. How are you going to reach the voters?

You see where the Democratic Party is talking about sample ballots. There might not be people at the polls because of the pandemic: people will have to look at that logistically. It’s difficult to get people to focus on this in a presidential year.

You also have to look at your opposition. They have a lot of money and some big names they can bring in. People who support nonpartisan redistricting don’t have that. Because of that, you have to anticipate the opponents will have an easier time selling their narrative. In many ways, elections are about stories: the best story wins. The ability the opposition has is that their narrative is out there, the public wants to believe it, and they have the advantage to keep dictating what it is at this point. They can have whatever narrative they want if they have more money and more access to the public. Of course they’re rushing it because they want to do this next year. A lot of money, a lot of arm-twisting, and a national group is behind this that operates in a lot of states. What do they care about Virginia? They’re trying to stampede us. What they want us to pass is not what they’ve promised and not what the General Assembly has claimed it wanted all these years.

What can people reading this do to fight this?

The first thing people should do is tell the General Assembly that they want fair, honest referendum language on the ballot, not what you have now, where the language means one thing to voters and another to the politicians and national operatives who are laughing at them. When voters find out that this doesn’t guarantee what politicians say it will guarantee, they’ll understand. You have to be absolutely sure that people want what goes into the Constitution and understand what they’re voting for because once it’s in the Constitution, it’s very hard to get out. If partisan operatives put a flawed, misleading redistricting committee in the Constitution, it’s done.

Treat the voters like they want to be treated. In my experience, if you trust the voters, the average Virginian will say: we can do better than this. The right to vote is the right to an informed vote. If voters still support this, then that’s fine, but they should know this before they vote. Don’t mislead people.

If this is so good, there’s nothing to stop the General Assembly from saying, we’ll abide by it. That’s not a reason to bind future General Assemblies by putting it in the Constitution.

The bottom line is: if this is everything they say it is – nonpartisan, citizens get equal say, no more gerrymandering – why do they need a misleading referendum?