There’s a lot of competition for the title, but hard-right Del. Mark Cole (R-Stafford/Spotsylvania/Fredericksburg/Fauquier) appears to be working *VERY* hard to be the most far-right extreme member of the Virginia House of Delegates. Recently, Del. Cole has been busy spreading wildly false conspiracy theories about the 2020 election, including garbage that violated Twitter rules and was taken down.

Of course, this is the same guy who, previously, sponsored HB53, “a bill in the House of Delegates which would ban involuntary implantation of microchips into humans by their employers”; his rationale being that “there’s a prophecy in the Bible that says you’ll have to receive a mark, or you can neither buy nor sell things in end times, some people think these computer chips might be that mark.” Cole also sponsored HB663, “restricting public restroom use according to a person’s ‘anatomical sex’, defined as ‘the physical condition of being male or female, which is determined by a person’s anatomy’”; etc.

Now, with the 2021 Virginia General Assembly starting up in a few weeks, Del. Cole has started introducing legislation, and…yep, it’s about what you’d expect from this nut. See below for Cole’s HB1745, introduced today, which “Requires any bill passed by the General Assembly when one or both houses meet and vote virtually to pass the bill to contain a provision requiring the expiration of such bill one year following the date the bill takes effect.” In other words, since the Virginia House of Delegates is planning to meet virtually in 2021 due to the COVID-19 pandemic, unless the legislation it passes has such a provision, it would disappear a year after it takes effect. Brilliant, huh? That’s one way to kill progressive laws you don’t like, I guess. Of course, this won’t pass, but still…yikes.

Then there’s HB1746 by Cole, also introduced today, an unfunded mandate which would require “the general registrar of each county and city to provide for a live video recording of each polling place while absentee ballots are cast, votes are counted, and returns are completed, and of each central absentee precinct while ballots are handled and returns are completed.” How much would this cost localities? Who would pay for it? Why is it needed? Who knows, but fortunately, this bill – like HB1745 – will be laughed out of the House of Delegates, as Del. Cole should be as well.

Finally, check out Cole’s HJ515, which would amend the Virginia constitution to establish the “fundamental right of parents to direct the upbringing, education, and care of their children.” Among other arguments against these types of “parental rights” amendments, Catherine Belter of the Virginia PTA wrote back in 1997 – in response to a proposed “amendment to the Constitution of Virginia during the 1996 and 1997 sessions of the General Assembly… introduced as part of a continuing effort by a number of groups to codify parental rights” – wrote that “the PTA believes such amendments will create havoc in the public schools,” including “the specter of schools forced to contend with a variety of parental demands on curriculum, discipline, and teaching methods and the related possibility of numerous lawsuits brought by disgruntled parents,” while also potentially “mak[ing] it difficult for government to assist children, when necessary, in health-related situations.” Brilliant, huh? But yeah, that’s Del. Mark Cole for ya. Fortunately, this amendment also will get nowhere, just like so many of Cole’s bills, but still…how does someone like this ever get elected to anything?!? 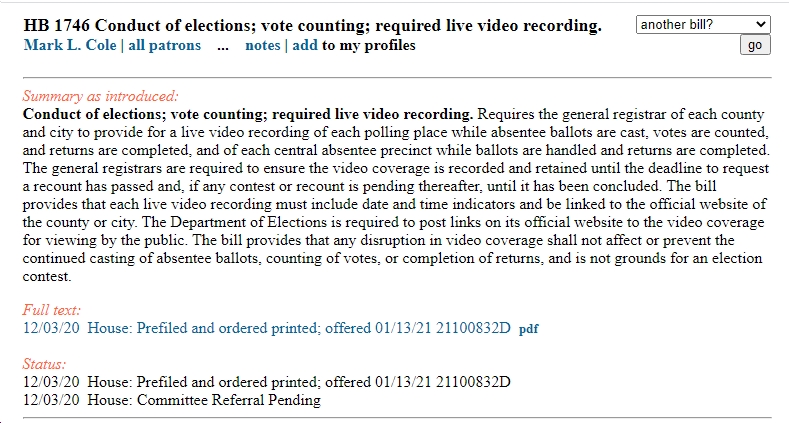 "They still have their reply to you up defending it while they are deleting the original" - @SenLouiseLucas https://bluevirginia.us/2022/12/delete-this-antisemitic-filth-va-dems-respond-to-va-gops-tweet-attacking-del-don-scott-for-receiving-donation-from-george-soros#comment-6055733285 cc: @DonScott757