“Perhaps that’s why Senate Republicans have nominated Marvin W. Gilliam, a coal boss from Bristol, who according to VPAP has given $927, 019 to Virginia political campaigns — and all but $3,000 of that to Republicans.

That includes more than 40 legislative candidates — topping out with $33,500 to homeboy Delegate Israel O’Quinn.

I’m sure that’s that kind of independent, nonpartisan commissioner supporters of Amendment 1 had in mind. If Gilliam makes it through, this is a bigger farce than could have been imagined.”

Also note that Republicans’ finalists are overwhelmingly male, white and wealthy. Yes, this redistricting amendment is working out just greeeeeaaaat. Not. 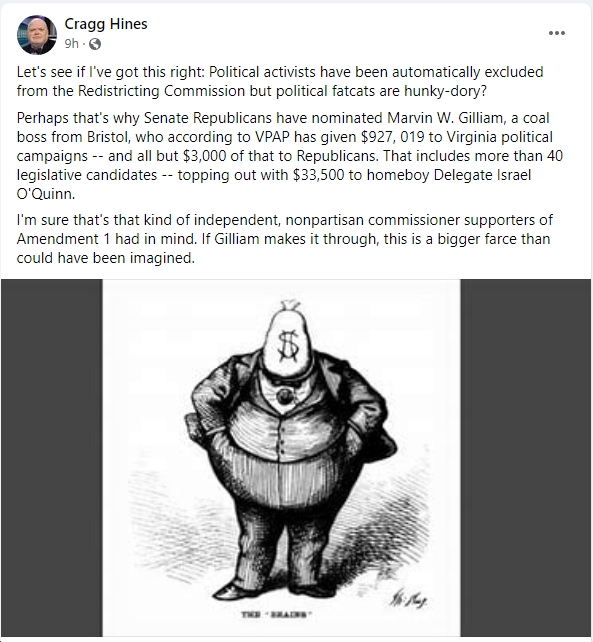 Final Maps for VA House of Delegates, State Senate Have *Lots* of Incumbents Paired/Tripled Up.

Wednesday News: “Climate activists push for an abrupt end to the fossil fuel era”; “Biden is learning not to fret over vaccine deniers”; “U.S....

Virginia Supreme Court Unanimously Approves New US House, State Senate and House of Delegates Maps for the Next Decade