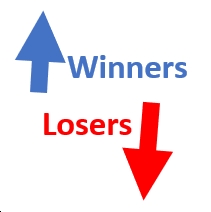 Here are a few winners and losers  from yesterday’s primary elections that I believe are worth highlighting. Note that this list isn’t even close to comprehensive – nor is it intended to be (in part because it could go on for days…and at some point, enough is enough, lol!) – so please add winners and losers of your own in the comments section. By the way, it’s important to point out that you can be a “winner” even if you’re a right-wing Republican (e.g., McDonnell and Cuccinelli in 2009 were huge “winners,” even though they completely suck!) or whatever, and that you can be a “loser” even if you’re my favorite Democrat in the world, because in this context “winner” and “loser” is all about whether someone “won” or “lost” politically in this election cycle, not whether that makes me happy or not or whether it’s normatively a “good” or “bad” thing, per se.  With that…on to the Winners/Mixed/Losers from the June 8 Virginia primaries.

P.S. I also asked a bunch of people for their “winners and losers” suggestions, and got some good ones…some of which overlapped with mine. Thanks to everyone who contributed to this list! 🙂

UPDATE 6/10: Thanks to Adam Siegel for this suggested addition to the “Losers” list.

“I think a loser would be ‘Democratic Party debates on/run by Fox/Sinclair outlets’ considering the numerous questions that came essentially right out of GOP talking points in multiple debates. Not sure what the answer is, considering the media landscape in Virginia, but no one (okay, no Democrat) can see having Democratic Party debates being moderated by (extreme … in some cases) right wing outlets/personalities is appropriate (or good) for Democratic Party primaries (and, well, not exactly good for general election either).”