After last Friday’s disarray at the Virginia Redistricting Commission, including by three Democratic citizen commissioners (co-Chair Greta Harris, plus James Abrenio and Brandon Hutchins), it was an open question whether the Commission’s meeting today would also break down. In the end, they managed to hold a meeting (see video and highlights, below), but not to take any votes or make any decisions, but instead to hear public comments and to…talk about stuff (including whether/how to proceed on drawing Congressional district maps, also whether there was even any point in continuing to think about State Senate and House of Delegates maps, or just punt those to the VA Supreme Court at this point).

In the end, though, really the key part of today’s meeting was the final 45 minutes or so, during which Del. Les Adams (R) threw a verbal hand grenade into the proceedings, appearing to suggest that Co-Chair Greta Harris was no longer legally on the Commission, given her walkout on Friday. This resulted in a response from Harris, saying she only left the meeting Friday but had NOT resigned, and from other Commissioners mostly backing her up. The meeting then proceeded to Commissioners venting their frustrations, engaging in a Seinfeld-style “airing of grievances”/group therapy session, talking about their personal lives/marriages/kids/psychologists/etc. Fun times; check it out, below: 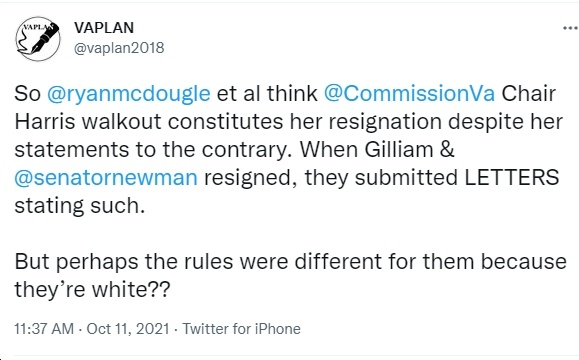 Apparently the Republican Senators on @CommissionVa have decided to put on a Soap Opera for today's meeting and are determined to continue the lie that they somehow have tried to compromise during this process.

Ankit Jain nails it: 1) deciding to use two map drawers was a huge mistake; 2) Rs’ unwillingness to compromise was what derailed the commission, “right now [compromise] only seems to be coming from one side” (the Dems), while Rs voted down reasonable compromises time and again…

.@CommissionVa lawyers advise that 14 day extension kicks in automatically even if Commission takes no vote. But they suggest issuing a statement to let courts know to get started.