See below for yet another brilliant thread by Georgetown University Visiting Professor Thomas Zimmer. In this one, Professor Zimmer explains that Trumpists are NOT “animated by pure nihilism,” but that instead it’s motivated “by conviction – by the idea that America must forever remain a land where a traditional white Christian patriarchal order is upheld.” Which is a horrifying, dark, dystopian, “Handmaid’s Tale”-style vision for America that we must never EVER allow to come to pass. Also, it should go without saying – despite so many in the political press who push this tripe – that Trumpists are NOT “simply motivated by economic anxiety, for which there is very little empirical basis.” Nor are they, in the least bit, “interested in debate, or a different perspective, or building bridges, or compromise.”

So where does all this “resentment, anger, and lust for revenge” come from? Professor Zimmer explains that it’s about the Trumpists’ “racialized, gendered fears about the ‘wrong’ kind of people getting ahead in America”; that the “supposed victimization of white Christians has to be reversed, their rightful status at the top needs to be restored“; and that “an egalitarian, multiracial, pluralistic order” must be prevented at all costs. A key point along these lines is this:

“At its core, the politics of ‘law and order’ has always been a promise (and a threat) to mobilize all the tools available to the modern state to keep insubordinate groups in check and uphold a certain racial, social, and cultural order: traditional white Christian rule…The Thin Blue Line flag doesn’t say ‘We stand with the police’  – it says ‘We stand with the police as long as they’re working to uphold the kind of ‘law and order’ that allows us to dominate with impunity while subduing those who dare to oppose our rule.’”

The bottom line of all this is clear: “The fact that the Right in general is deliberately pursuing a reactionary political project, one that is animated by ideology and conviction rather than blind, nihilistic rage, makes the threat to American democracy more, not less acute.” Which is why it’s so crucial that it be defeated. And no, it’s not just – or even mainly? – about Trump himself; it’s about TrumpISM, which is simply a variant of far-right, reactionary, authoritarian, racist “populism” that long preceded Trump and, sadly, will long outlast Trump. Thus, someone like Ron DeSantis, who fits almost perfectly with what Zimmer has described in his latest Twitter thread, would arguably be just as bad – or even worse, in that he’d be more disciplined and methodical about his fascistic project – than Trump. So…do NOT let your guard down, even for a second, because the threat to our democracy and to our entire way of life is far, far from past, and may not ever be in our lifetimes. 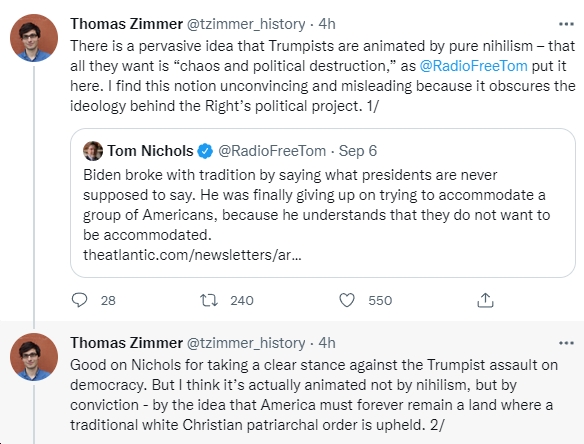 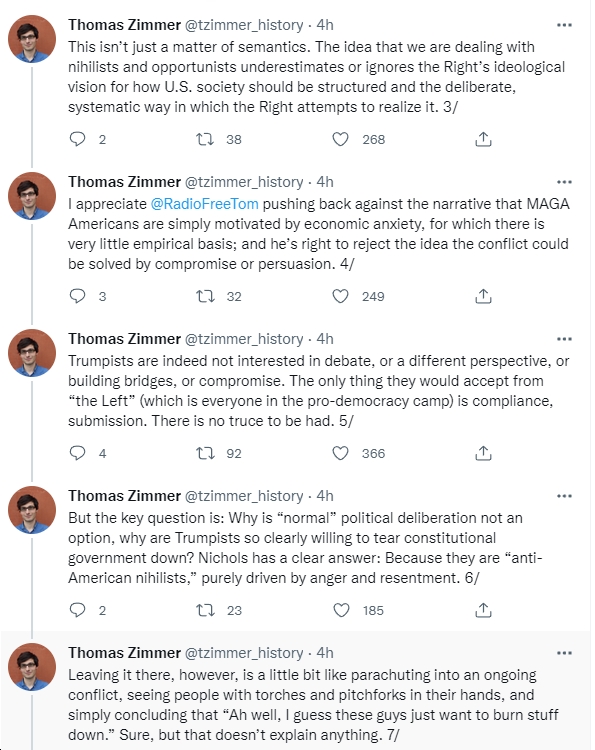 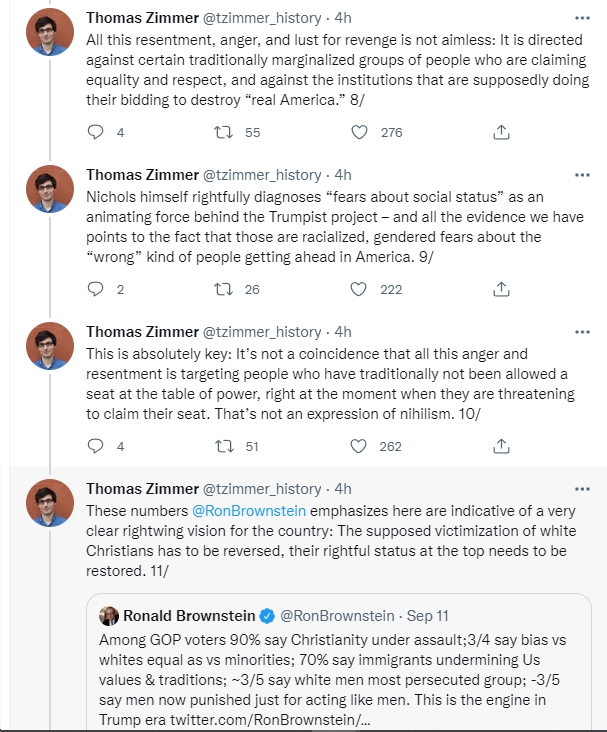 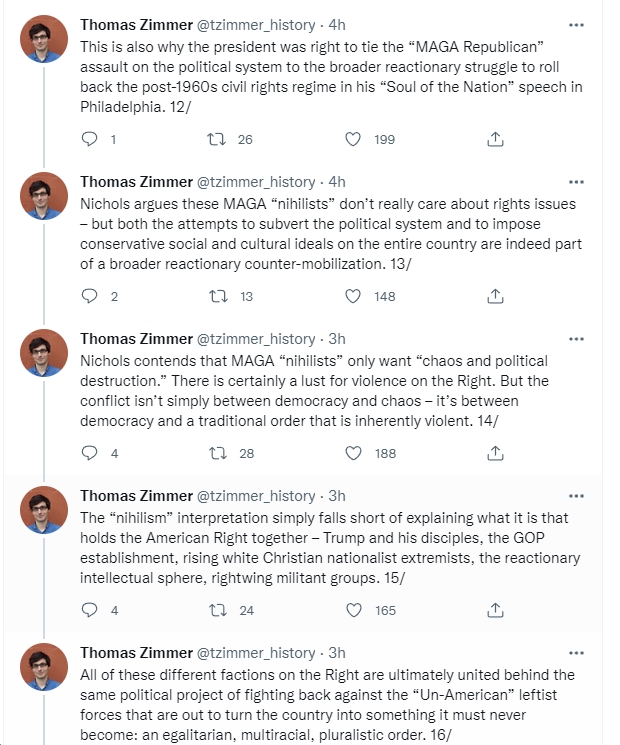 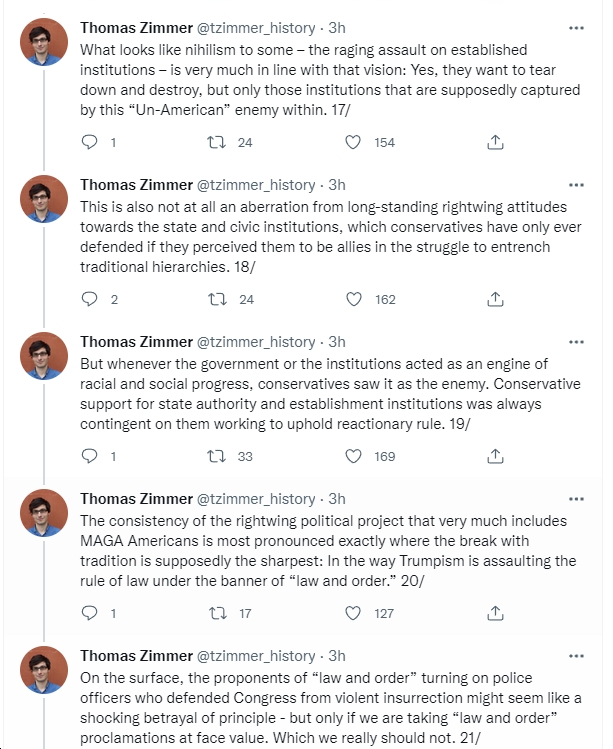 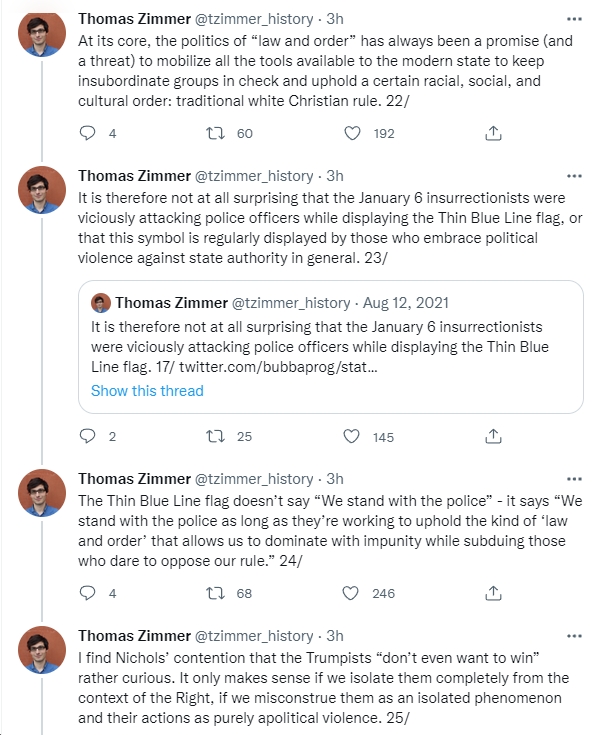 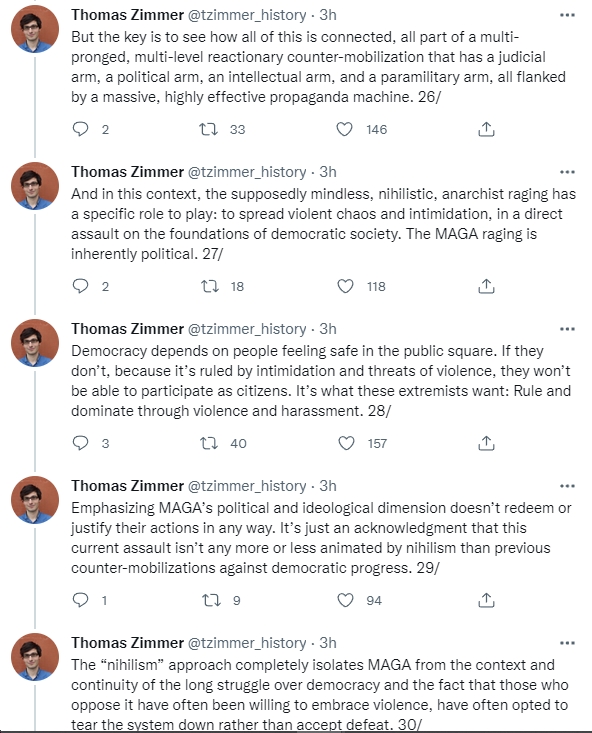 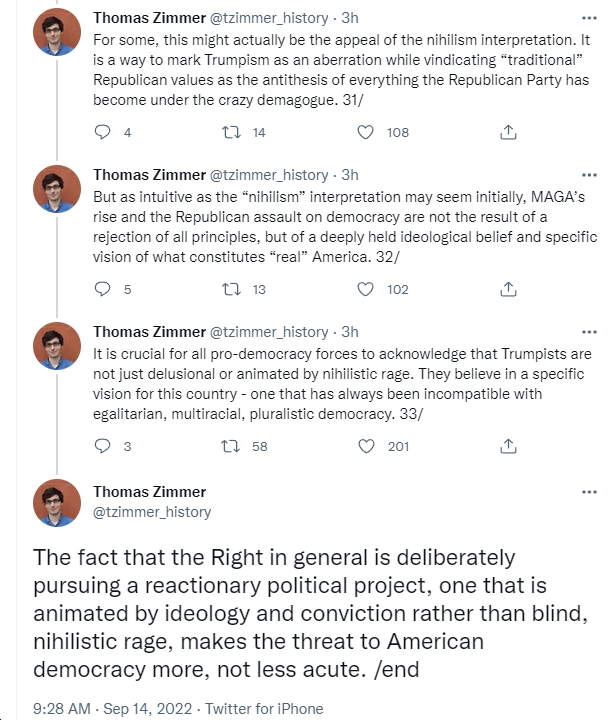