National Geographic News recently posed a somewhat puzzling question: Is Canadian crude oil (also known as tar sands oil) worse than other types of crude? The question was posed in the wake of the disastrous and all-too-predictable ExxonMobil oil spill "across an Arkansas suburb" a week ago. National Geographic's question is puzzling because it really misses the point of what many Americans truly wish for: a move away from fossil fuel energy.

As I hinted at above, Exxon's pipeline rupture and subsequent massive oil spill hardly comes as a surprise for those of us in the land of reason. For instance, it's reasonable to assume that if the flow rate of a pipeline, say the existing Keystone pipeline, is 410 barrels a minute across a series of pipes hundreds or thousands of miles long, an accident is bound to happen, and that "accident" will dump over 6,000 gallons of crude IF TransCanada is accurate in their 15 minute-flow cut off time (a big IF!). If this flow cut off time is higher, say by 5 minutes, an extra 2,000 barrels of oil will be spilled, adding an even bigger insult to an already preventable injury. As the world warms, Dominion Virginia Power seems as committed as ever to continue down its usual path of greenhouse gas intensive energy production. On Monday, Dominion took the steps necessary to "move forward" with its Dominion Cove Point Liquefied Natural Gas (LNG) liquefaction project. The price tag on this global warming nightmare is anywhere between $3.4 billion and $3.8 billion, according to an application submitted on Monday to the Federal Energy Regulatory Commission.

In their kind-heartedness, Dominion has chosen to build a 'relatively environmentally friendly' energy plant by selecting LNG. The fact remains, however, that LNG adds a significant amount of greenhouse gas emissions, from the cradle to the grave, to the planet's atmosphere. **Cough, cough**

CCAN's latest ad reminds Virginians how ludicrous it is for Dominion Virginia Power to publicly present itself as 'environmentally friendly' or in touch with the demands of Virginians for clean energy. If Dominion spent half as much money actually investing in clean energy research and development and construction as it does with public relations activities to give itself an environmentally friendly pat on the back, Virginia would already be well on its way to averting a climate change induced environmental disaster.

An End to Clean Energy in Virginia???

Today's news from the Washington Post that Dominion Virginia Power and Attorney General Cuccinelli have reached an agreement on Virginia's renewable energy law, if true, could mean a dagger through the heart for Virginia's clean energy industry.

Some within the environmental community will disagree with me, and they would probably tell you the law was so bad that it should be repealed and replaced with a new more effective clean energy standard.  I would agree if that were a possibility but, it is not.

Here are a couple of the realities which come to fruition if Virginia's voluntary RPS is repealed:

First, investments in clean, renewable energy are now subject to the strictest interpretation of the Virginia State Corporation Commission.  The commission has never approved a full clean energy proposal put forward by Dominion.  It has limited the size of the utility's energy efficiency and solar programs. Congressional Republicans, led by House Majority Leader Eric Cantor (R-VA), have been blocking extension of several key clean energy tax credits, investments that represent a tiny fraction of the subsidies received by the oil, gas & nuclear industries over time. And here in Virginia, officials have dragged their feet on encouraging offshore wind and been accused of letting Dominion Virginia Power slow down the process.

Now the GOP's ideological war is having real consequences and costing Virginia jobs at a critical time for the fragile economic recovery. Wind energy giant Gamesa has announced that if the U.S. and Virginia can't commit to wind energy, it can't commit to the U.S., building key new wind prototypes off Spain & Africa instead:

Going Solar is About Savings & Security, Not Organically Pickling Stuff

TheGreenMiles - May 11, 2012 0
A solar power company called SunRun has unveiled these brilliant new ads. The company will put solar panels on your home for little or no up-front payment, take care of all the maintenance, and sell you the energy at a rate that's not just competitive with or lower than energy produced by huge, expensive, centralized power plants, but locked in no matter how high non-renewable resource prices spike.

The service is available in 10 states, but not Virginia, because if anyone tries to help Virginians lower their energy rates, cut their carbon footprints and gain independence from giant polluting power corporations, they can expect to get dragged into court by Dominion Virginia Power with the tacit approval of Virginia's elected officials. 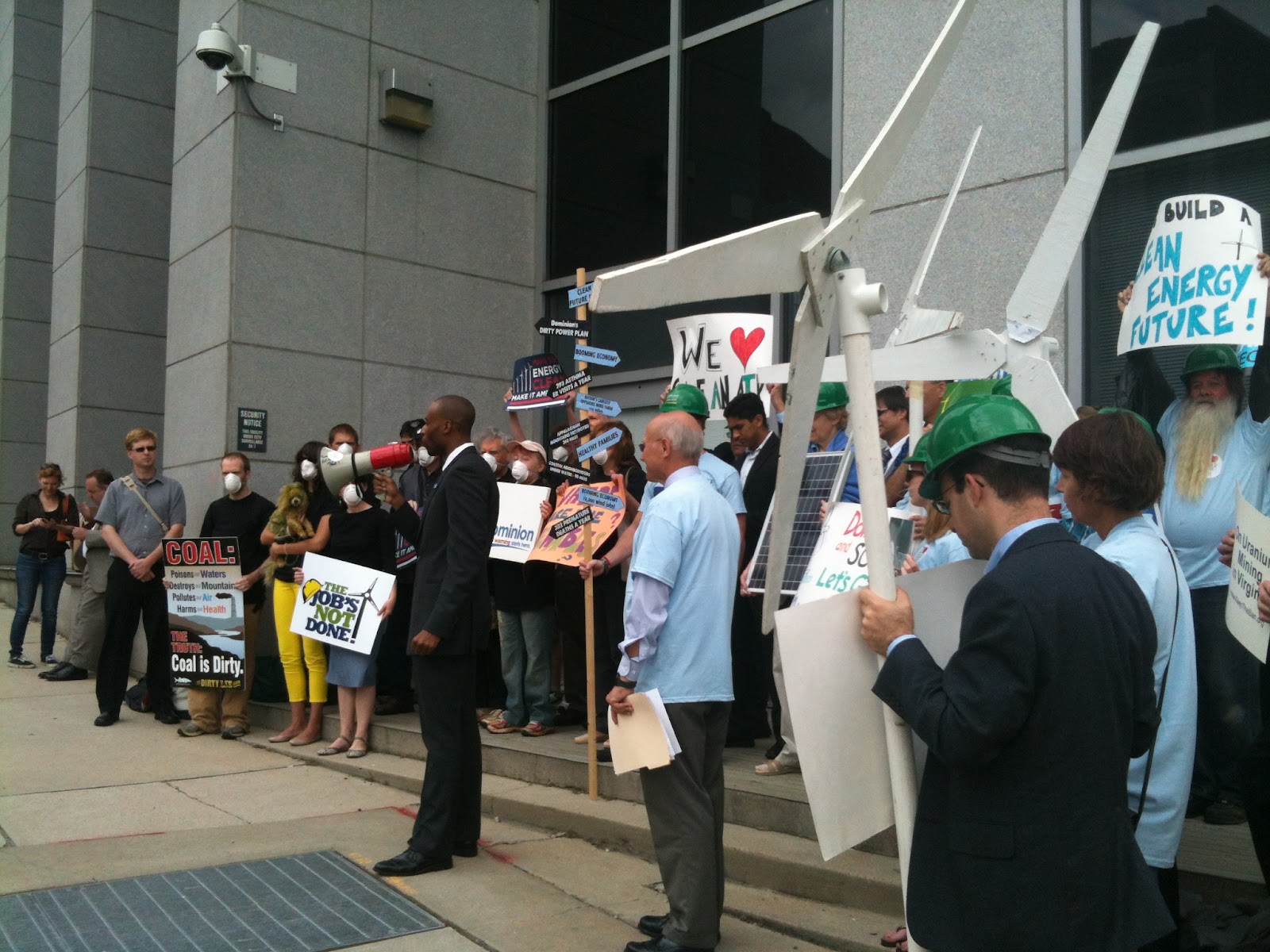 In an attempt to defend its almost complete disregard of clean energy in its Integrated Resource Plan, Dominion VA Power made a number of arguments in its defense in a statement given to the Associated Press prior to a scheduled SCC hearing regarding its 15-year energy plan on Tuesday. First, Dominion emphasized that its 15-year plan is not "set in stone".  Dominion also cited its PROPOSED addition of 30 megawatts of solar power on leased commercial rooftops (this seems to me to be more of an argument against Dominion. 30 megawatts, really?). Thirdly, Dominion also pointed to its bids for leases to build wind farms off of Virginia's coast. All of these arguments need to be filed under the growing narrative of Dominion as big on words of good intention and woefully short on substantive action towards clean energy.

First, given Dominion's paltry baseline for renewable energy in 2026 (2.8%), any increase in their percentage of renewable energy in the years ahead would undoubtedly remain at unsatisfactory levels, at levels which would hardly put a dent in our state's greenhouse gas contributions.

The Confused Road of the Renewable Portfolio Standard in Virginia

I'd like to share with you another preposterous bill that passed both chambers of Virginia's General Assembly this session without much media attention or public outrage, that bill's name is SB 413/HB 1102 . Ever heard of it? No? That's okay, here's a quick rundown.

SB 413/HB 1102 weakens the already weak Renewable Portfolio Standard by allowing utilities to receive Renewable Portfolio Standard credit for, wait for it, research and development of renewable energy. Utilities don't have to actually generate renewable energy, just conduct "research and development." Don't you feel better about how your taxpaying dollars are being spent?

But wait, there's more. SB 413/HB 1102 also gives "double credit" to energy generated by burning animal waste. Anyone have any guesses on who influenced this outrageous section of this ridiculous bill?

If you would like to let your delegate or senator know how understandably outraged you are, please follow this link: http://www.chesapeakeclimate.o...

On top of that, Dominion executives plan to keep on developing fossil fuel power plants and ignoring renewable energy.  According to the company's 2011 Integrated Resource Plan, which looks 15 years into the future, they plan to still generate less than 3% renewable energy in 2026.

These are a few of the reasons why the Chesapeake Climate Action Network  along with other environmental groups is holding a rally and a march outside of Dominion's HQ in Richmond on March 24 at 12PM. On March 24, supporters of clean energy will meet at Kanawha Plaza  to march around Dominion VA Power's HQ and form a human chain. We will demand that Dominion invest in clean energy for VA's future now. There will also be world-renown and Virginia-based environmental speakers such as Phil Radford of Greenpeace USA and Mike Tidwell of the Chesapeake Climate Action Network (CCAN) who will discuss the need for clean energy in Virginia, the role of corporate money in politics, and how Virginia can become the example for clean energy use and construction. If you support clean energy, now is the time to come out and show it. This will be the biggest environmental rally in Virginia's history. I hope to see you all on March 24 and we can make history together!

In the roundabout and vague language of Dominion VA Power, specifics are the only form of statements that can be trusted by this company. So when an employee of Dominion comments that Dominion "will continue evaluating transmission options to ensure the identification of the lowest cost alternative for bringing offshore wind electricity to consumers," it sounds like a vortex of time has opened up for Dominion to cozy up to wind energy whenever they feel the urge (the quotation came as a response to a recently released report by AAB Power Systems Consulting that evaluated the "offshore transmission options to support future projects").

The issue, then, isn't whether wind energy is going to be built and used in Virginia; it's a question of when. How many more years do Virginians have to wait for Dominion to find "the lowest cost alternative" before we begin to reap the noticeable benefits of offshore wind energy? Sure, the review process isn't a simple one, but enough is enough, it's time to start building wind energy for Virginia.

Some Virginians have worried about the higher initial costs of offshore wind energy, costs which the Department of Energy has estimated to amount to 24 cents per kilowatt hour. However, these costs do not take into account the health benefits that Virginians in particular will reap from an increasing reliance on offshore wind energy.  If and when economists agree on a way to "cost" the health benefits from clean energy, the difference between the latter and fossil fuel energy costs will not seem so stark.

Virginians shouldn't have to plead with their utility service to pick up the pace on investing in renewable energy. But the reality is that we have to continually remind Dominion that the health and wallets of Virginians are more important than their bottom line. On March 24 at 12PM, I hope to see you all at Virginia's largest environmental protest outside of Dominion's HQ in Richmond. Our individual actions can make a difference, and we'll only know if we try.

The CEO of the Richmond, VA based Dominion Resources Inc., Tom Farrell, noted that any national energy strategy must decrease the use of fossil fuels during his Keynote Speech at CERAWeek 2012.

It's a relief that Mr. Farrell recognizes America's crushing reliance on energy sources that are wreaking havoc on our lungs and our climate.

What Mr. Farrell is really saying is that he and his company want to be at the head of this energy revolution, controlling the market share along with the profits. At least, this is what Dominion's Robber Baron past would lead one to conclude.