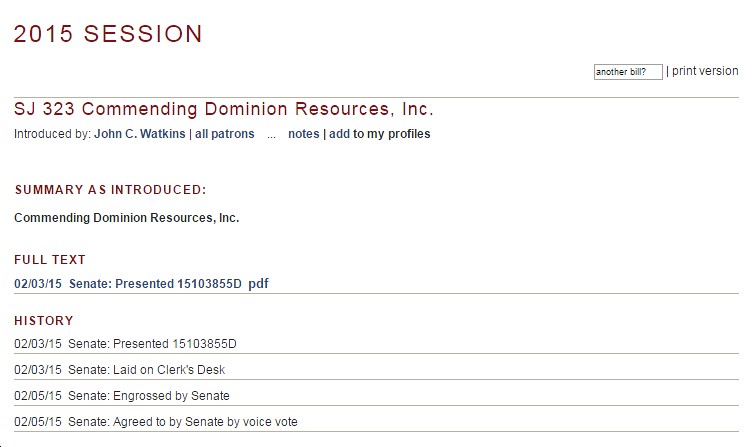 Those in Nelson, Augusta and other counties across the Commonwealth fighting Dominion’s proposed Atlantic Coast Pipeline are appalled the chair of the Commerce and Labor Committee, Senator John Watkins, would write this Resolution commending Domminion Power and take it to the Senate Floor for a vote [Lowell’s note: where it passed by voice vote; same thing in ths House of Delegates], even after he heard the testimony of landowners regarding the aggressive, bullying tactics Dominion has used in its efforts to secure survey of private property against the will of landowners.

This is just another example of our elected officials bowing to Dominion, portraying Dominion as a good corporate citizen, while continually passing legislation benefitting those legislator’s largest corporate contributor against the best interests of the citizens of the Commonwealth!  Senator Watkins was very much in favor of the “Ratepayer Ripoff Bill” (SB 1349) which shields Dominion from reviews of its books, while thwarting legislation which would have repealed the survey law (SB 1338).  Nelsonians couldn’t be happier that Watkins is retiring!

WHEREAS, Dominion Resources, Inc., and its employees earned Electric Light & Power magazine’s 2014 Utility of the Year distinction; and

WHEREAS, Electric Light & Power has been a leading voice of the electric utility industry since 1922; and

WHEREAS, the publication’s editors rated Dominion on its customer satisfaction, philanthropic endeavors, infrastructure investments, environmental and sustainability initiatives, profitability, and management of market risks, among other metrics; and

WHEREAS, Dominion is headquartered in Richmond and is one of the nation’s largest producers and transporters of energy; and

WHEREAS, Dominion’s subsidiary, Dominion Virginia Power, has served electric customers in Virginia reliably and well since 1909; and

WHEREAS, Dominion Virginia Power serves 2.4 million residential, commercial, industrial, and governmental accounts in the Commonwealth; and

WHEREAS, the average Dominion Virginia Power customer lost power for 155 minutes in 2014, including major storms; it was the utility’s best year for customer reliability since 2001; and

WHEREAS, countless Virginians remain grateful for Dominion’s outstanding service; now, therefore, be it

RESOLVED by the Senate, the House of Delegates concurring, That the General Assembly hereby commend Dominion Resources, Inc., for winning Electric Light & Power magazine’s prestigious Utility of the Year designation for 2014; and, be it

RESOLVED FURTHER, That the Clerk of the Senate prepare a copy of this resolution for presentation to Thomas F. Farrell II, chair, president, and chief executive officer of Dominion Resources, Inc., as an expression of the General Assembly’s gratitude and admiration for the company’s commitment to service.