UPDATED 6/6/16: Since we broke this story on Friday, at least two publications, including the Republican Times-Disgrace (aka, “Richmond Times-Dispatch”) have reported on this story as well, without crediting Blue Virginia as first reporting it. #journalisticethicsFAIL Also, Corey Stewart seems to be enjoying whatever press he gets. Check out his latest Facebook comment (bolding added by me for emphasis).

Got some more press for my plans to “kick the asses” of illegals out of the country. Some people think that’s too harsh. We have millions of illegals in this country who are killing, raping, assaulting and robbing innocent American citizens. When they are apprehended, the Feds tell local law enforcement to let them go.

When it comes to illegal immigration, the Republican establishment is no different than the Democrat establishment. They don’t want to “offend” anyone. When Ed Gillespie was Chief Counsel in George Bush’s White House, we tried to get him order the deportations of the illegals we were sending them. Not only did they refuse, but they lied about it, and would not disclose to us what they did with the 7,500 illegals we handed them. We found out later that the illegals, many of whom had committed serious violent crimes, were released to repeat crimes against our families. That’s harsh. Harsh on law abiding citizens. Harsh on our families. Harsh on America.

P.S. Just to be clear, as I’ve already posted numerous times on Twitter, Facebook, this blog, etc. — there is never ANY excuse for violence in politics, period. None. It’s also really stupid, in the sense that it could turn Trump and his supporters into victims themselves. Instead, the answer is peaceful, non-violent resistance (look to Martin Luther King, Jr., the Freedom Riders, etc. as examples), including VOTING this November! 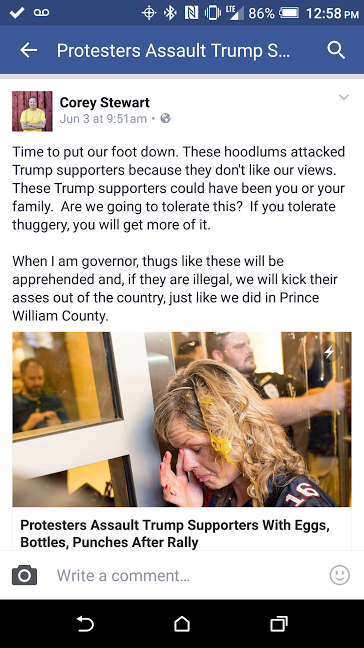