A couple weeks ago, we reported on how the Republican nominee for State Senate in SD7, Jen Kiggans, was hard-right (“we can’t continue down this path of socialism!” “I think the ERA could overturn some laws…that benefit women”) during the primary this spring, but has now shifted her tone in the more moderate – or more like phony moderate – direction. As I asked about Kiggans, how can anyone – right wingers who supported her in the primary or more moderate voters this fall – believe she’s sincere now on ANY issue, when her language has changed so suddenly and dramatically on this one? Got me.

Not surprisingly, Kiggans isn’t the only Virginia Republican candidate putting on the faux-moderate act. State Sen. Glen Sturtevant (R-SD10), of course, is a classic example – ZERO rating from NARAL Pro-Choice Virginia, but he (cynically) supported ERA ratification this past session, so all is forgiven?  Nope, don’t think so; please help elect Democrat Ghazala Hashmi instead!

And then there’s good ol’ Sen. Amanda Chase (R-SD11), who  between April and July 2019, Amanda Chase removed all references to her promises to fight Medicaid expansion and the Affordable Care Act (aka, “Obamacare”) in Virginia, as well as her intention to fight existing gun regulations. Both promises were available on her website as late as April 11, 2019, but have been removed as of July 2019. Fascinating, isn’t it?

Here are screen shots of “then” vs. “now.” Notice the difference? 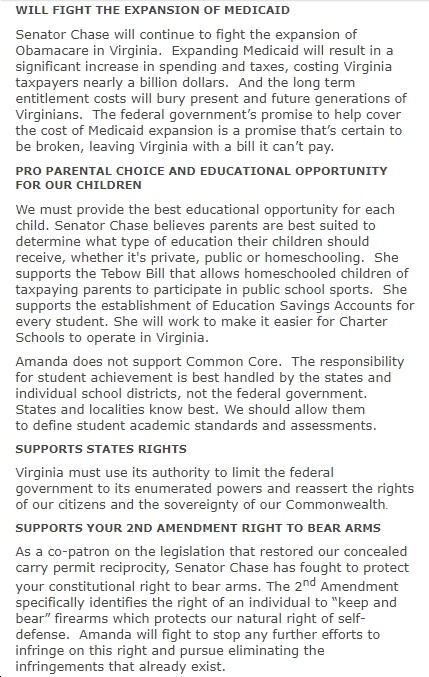 So which Amanda Chase is the REAL Amanda Chase? Seems very clear to me: it’s the one who said “It’s those who are naive and unprepared that end up raped”; the one who also said “I Call My Revolver My Little Equal Rights Amendment”; the one who called Capitol police partisan liars; the one who praised “Make Bang Bang” Gun Guy’s “great group who believe in our constitution and rights as Americans.”and the one who claimed that “The ERA Amendment is nothing more than a ploy by the left to eliminate gender altogether.”

Any further questions about who the real Amanda Chase is? If not, then please help elect Democrat Amanda Pohl – the good Amanda! – on November 5!