Not content with turning the VA GOP into more of a laughingstock, dumpster fire, etc. than it already was when he became Chair back in August, former Del. Rich Anderson (R) is now spending some of his time launching a wild attack against Prince William County Board member Kenny Boddye (D-Occoquan). See below for Anderson’s email, in which he attacks launches 100% false, borderline unhinged attacks on Boddye, such as the following. As you read this, think about what would make Anderson so angry, such as the fact that Boddye defeated Anderson’s wife, then-Supervisor Ruth Anderson (R), in November 2019 by a narrow, 50.8%-49.0% margin. Also note that Boddye is a progressive Democrat, basically the antithesis of the increasingly Trumpian, hard-right former Del. Anderson. And, as you read the dog-whistle-style attacks (bolding added for emphasis of the nastiest/craziest parts) by Anderson, keep in mind that Boddye is a 34-year-old Black man, while Anderson is a 65-year-old white guy. Hmmmm…

Clearly, the stress of trying to lead the VA GOP these days must be getting to Anderson. For more on why that might be the case, see The Virginia GOP Is Trapped In a Trumpian Maze Of Its Own Creation; AP Reports: “In Virginia, Republican Chaos Reaches a Breaking Point”; Audio: VA GOP Chair Says Party “Careening” Towards No Primary, No Convention and…Just 72 People on State Central Selecting Its 2021 Statewide Nominees!; Video: VA GOP Chair Says “[party] staff deserves to have a world-class facility, not the *literal ghetto* they now live and work and serve in.”; Video: As VA GOP Argues Endlessly Over Its Method of Nomination, State Central Committee Member Complains About “the VICIOUS incivility and attacks that have been coming from one side”; etc. Maybe Anderson might want to retire, maybe head out to…I dunno, Los Angeles or something? I hear the weather’s lovely out there, but of course Anderson would have to deal with Republicans being a small minority, just like where he lives now, Prince William County. Haha. 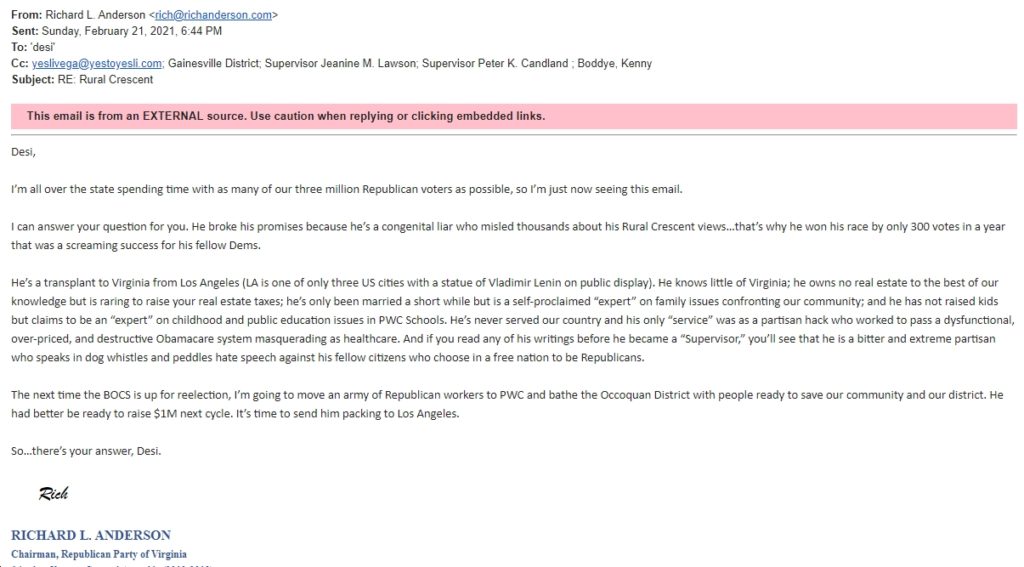