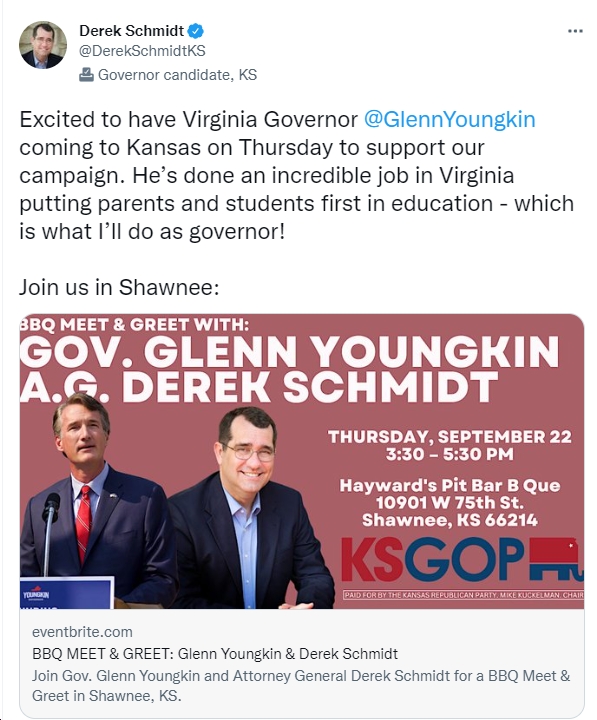 As you know, Glenn Youngkin’s been busy the past couple months campaigning across the country for a variety of far-right/MAGA Republicans, including elections conspiracy theorist/anti-abortion-extremist/total nutjob Kari Lake in Arizona;  Tudor Dixon in Michigan (another anti-abortion extremist and election conspiracy theorist, among other things), Paul LePage in Maine (said “the enemy right now…are people of color or people of Hispanic origin” and that no “sane people would want to allow transgender in our primary schools”; called a state legislator a “little son of a bitch, c*cks*cker”; etc.), Heidi Ganahl in Colorado (among other things, “refuses to denounce John Eastman, former CU professor and author of the fraudulent legal memo used to justify the Jan 6 plot, who has been subpoenaed by the Jan. 6 committee and by a grand jury investigating election fraud in Georgia”), Joe Lombardo in Nevada (he’s 100% anti-abortion, anti-“Red Flag Laws,” pro-“Don’t-Say-Gay” laws, anti-immigrant…), etc, etc.

So now, Youngkin’s going to be adding Kansas Republican gubernatorial candidate Derek Schmidt to his list of Trump/MAGA Republicans he’s campaigned for. How bad is this guy? Here are some “highlights”:

So yeah, this guy’s a complete nightmare. And supposed “moderate”/”sweater-vest”-wearing Glenn Youngkin is campaigning for him. ‘Nuff said.