The reactions to Rep. Abigail Spanberger (D-VA07)’s strong rebuke of extremist Rep. Bob Good (R-VA05)’s nasty, insane anti-LGBTQ bigotry (e.g., that “grooming” is supposedly “fueling trans suicides” and that teachers are supposedly involved in “‘genital mutilations’ of students”), spewed out at a meeting of the Virginia Congressional delegation earlier this week, are VERY revealing.

For starters, let’s just make it crystal clear that Abigail Spanberger is a hero, period. She’s also 100% correct (“That’s not f***ing true”) about Good’s 100% wrong, insane, bigoted, ignorant allegations. And, of course, Rep. Spanberger deserves to be reelected by a huge margin over her extremist/Bob Good-style opponent, Yesli Vega, who falsely believes that rape rarely leads to pregnancy…and who also thinks that calling out vicious, virulent bigotry equates to “screaming fits because boys can’t go into girls restrooms” (see her absurd comment,  which has ZERO to do with what Spanberger was saying, below).

In stark contrast to Vega, Del. Schuyler VanValkenburg nails it, regarding Good’s “disgusting and baseless…absolutely vile” crap, and “good on @spanbergerva07 for calling it out.” Also nailing it is Spanberger’s spokesperson, who says that Spanberger (h/t Brandon Jarvis of Virginia Scope) “will always stand up against QAnon conspiracy theories that harm or attack Virginia’s students, their parents, and their educators — as was the case when one of her congressional colleagues did just that.” And folks like Sam Shirazi and Caitlin Bennett also nail it re: Good’s “unhinged” comments “going after trans students and spreading misinformation.”

Of course, Bob Good is the same extremist, bigot, insurrectionist, etc. who called for cameras in kids’ classrooms, who made blatantly racist, revolting comments about Afghan refugees, who endorsed conspiracy theorist, 1/6 Trump rally attendee State Sen. Amanda Chase for reelection, who “Emboldened” “White Supremacists” Who Attacked the US Capitol; who “blast[ed] all colleges except Christian ones,” “urge[d] high school students to rebel against required mask wearing”; who said “I am thankful to have Marjorie Greene in the Congress, I think she stands for a lot of great things.”; etc. So obviously, vote for Democrat Josh Throneburg over this disgrace and embarrassment to Virginia, to Congress and to America. 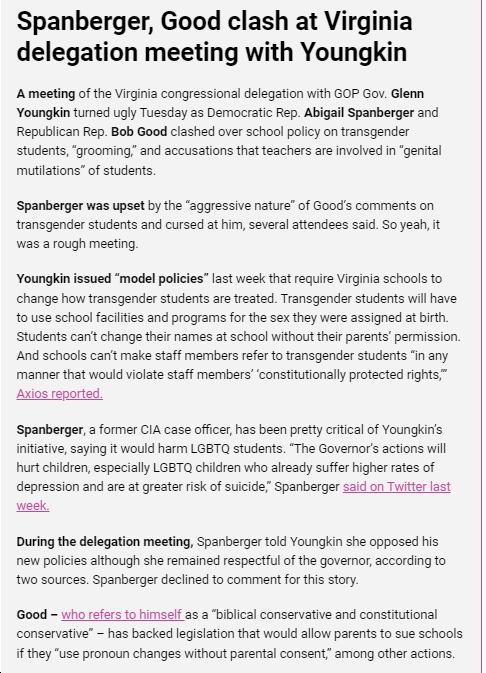 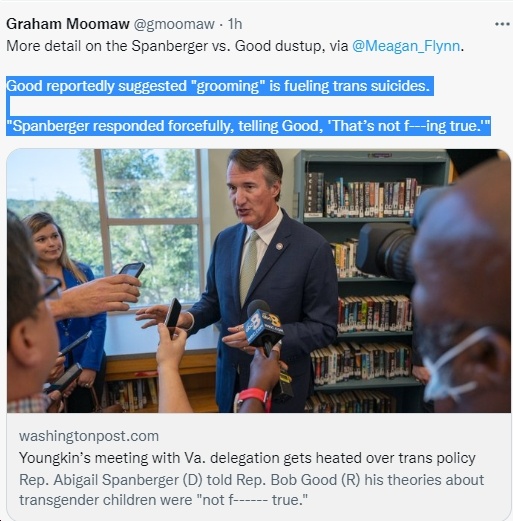 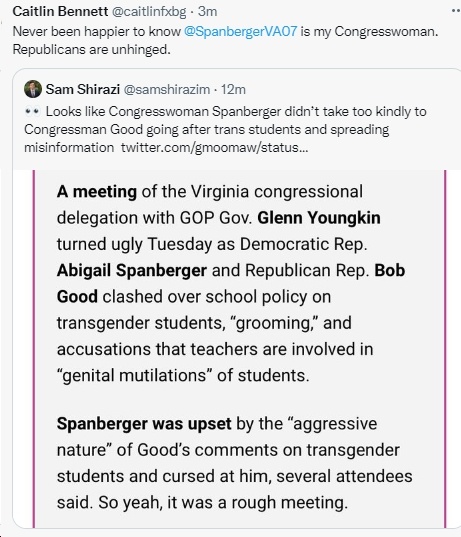 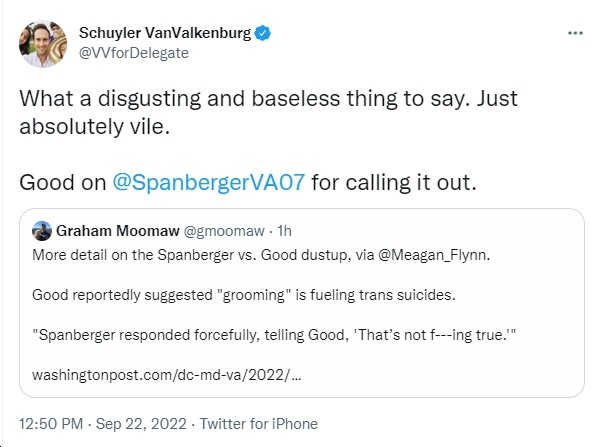 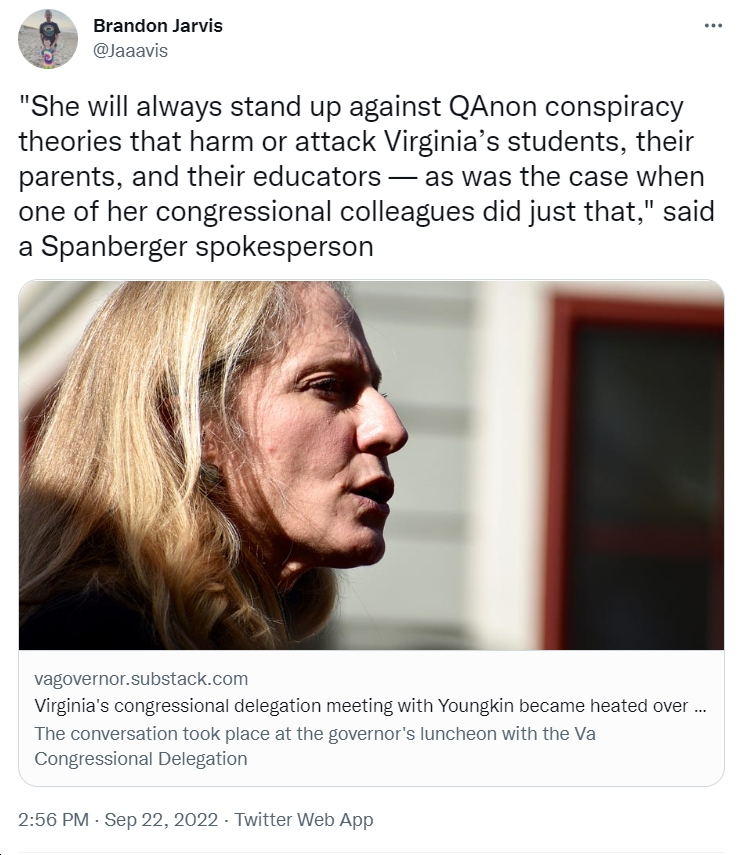 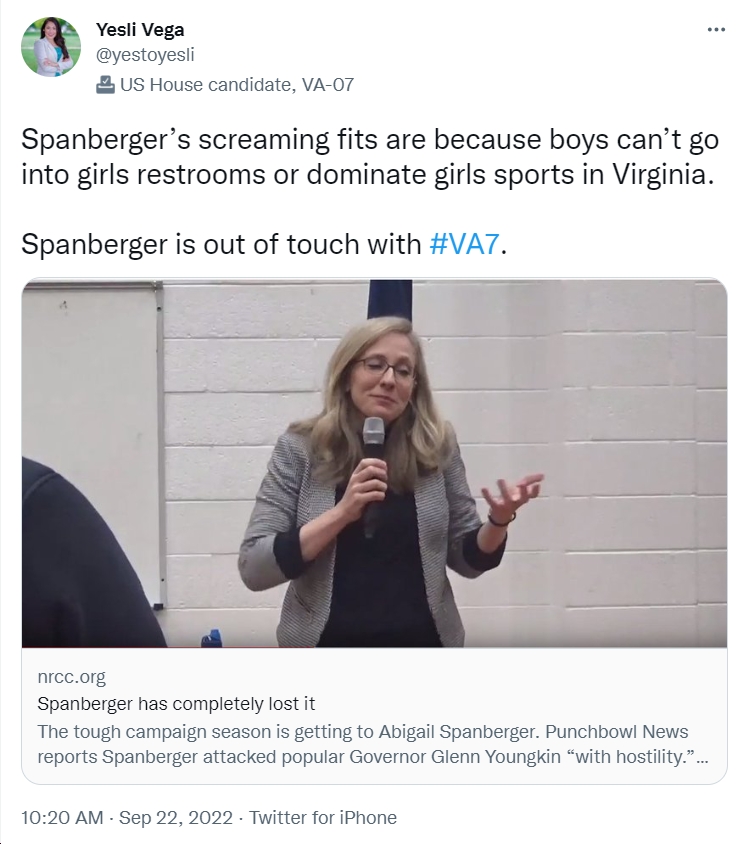