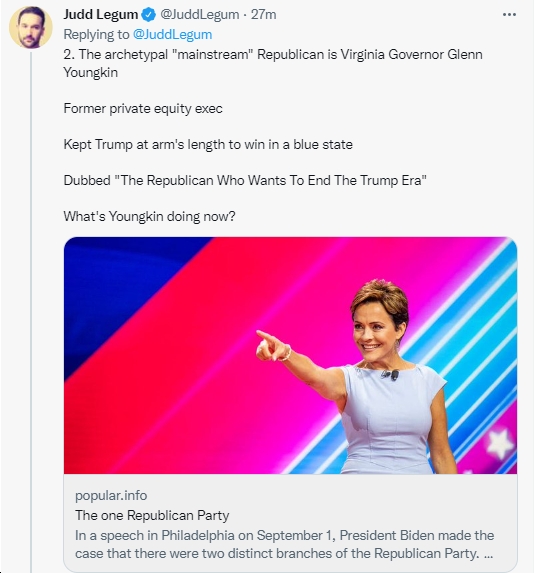 If you are a Virginia voter who spent last year getting their information about the governor’s race mostly from TV ads and the corporate media, you would have been badly misinformed about who and what Glenn Youngkin – not to mention Winsome Sears and Jason Miyares – was all about. For instance, as I wrote a few weeks before last November’s election, the WaPo had not one, not two, but THREE front-page articles on the Virginia governor’s race, all of which were utter trash, whitewashing/sanitizing/normalizing Youngkin as some sort of “mystery date” (note: if you’d read Blue Virginia during the winter/spring of 2021, during the GOP nominating process, you’d have known that Youngkin held right-wing positions on issue after issue). It hasn’t really gotten any better this year, with articles like the “love letter” to Glenn Youngkin written by WaPo reporter Greg Schneider. And then there’s possibly THE WORST, most pathetically embarrassing crap ever written about Youngkin, by Molly Ball in Time Magazine of all places (sample passage from that disgrace to journalism: “Affable, fun-loving, up for anything: It’s hard not to like Youngkin, a trait that accounts as much as anything for his sudden political celebrity”).

For the most part, though, it’s simply a LACK of coverage – let alone serious or in-depth coverage! – by the WaPo and most of the corporate media. Meanwhile, here at Blue Virginia, we’ve kept readers informed as Youngkin campaign for extremists around the country — Derek Schmidt in Kansas; elections conspiracy theorist/anti-abortion-extremist/total nutjob Kari Lake in Arizona;  Tudor Dixon in Michigan (another anti-abortion extremist and election conspiracy theorist, among other things), Paul LePage in Maine (said “the enemy right now…are people of color or people of Hispanic origin” and that no “sane people would want to allow transgender in our primary schools”; called a state legislator a “little son of a bitch, c*cks*cker”; etc.), Heidi Ganahl in Colorado (among other things, “refuses to denounce John Eastman, former CU professor and author of the fraudulent legal memo used to justify the Jan 6 plot, who has been subpoenaed by the Jan. 6 committee and by a grand jury investigating election fraud in Georgia”), Joe Lombardo in Nevada (he’s 100% anti-abortion, anti-“Red Flag Laws,” pro-“Don’t-Say-Gay” laws, anti-immigrant…), etc, etc. But good luck finding any of that in the “mainstream media,” which continues to massively fail our country at a moment of great peril for our democracy.

Fortunately, there are SOME people – not in the “corporate media,” of course – who do a great job. One example is Judd Legum’s Popular Information, which consistently breaks stories and digs into important topics in ways that the corporate media rarely if ever does. Today, for example, Legum examines the idea that there’s some sort of split between “mainstream” and “MAGA” Republicans, concluding that in fact there’s just ONE Republican Party. Legum highlights the example of our own Glenn Youngkin, who – with “a background as a private equity executive, not a bomb-throwing right-wing ideologue” – would seem to be the prototypical “mainstream” Republican. Except that, based on his 2021 campaign and certainly based on his actions since he’s been governor, Youngkin is clearly no better than any other “MAGA” Republican. Here are a few highlights from Legum’s superb article:

Plus, don’t forget that Youngkin campaign for unhinged extremist, racist, etc. Paul LePage in Maine, who said “the enemy right now…are people of color or people of Hispanic origin.”  In sum, as former Governor and Senator George Allen (R) liked to say, you “can tell a lot about someone by those they keep company with.” In Youngkin’s case, it tells us that he is not a “mystery,” a “moderate,” or anything else the corporate media’s political “journalists” have tried to ram down our throats for the past 1 1/2 years…