Ryan/TrumpCare Will Devastate Their Constituents; Here’s What Virginia GOP Reps are...

lowkell - March 14, 2017 0
As Republicans in the U.S. House of Representatives push to throw 24 MILLION Americans off of healthcare, while massively and disproportionately f***ing over their... 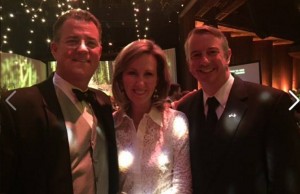 lowkell - November 18, 2016 0
From the Democratic Party of Virginia: Donald Trump has made several appointments, at least three of whom have denigrated Muslims or African Americans. One of... Back in January, I had a chance to sit down with Adam Cook, the Democratic nominee for Congress in the 1st Congressional District. Currently, that district is (mis)represented by a Teapublican who likes to pretend to be a "moderate" - but most certainly isn't! - named Rob Wittman. In 2010, the annus horribilis of the Tea Party, Wittman won reelection by a 64%-35% margin over Democrat Krystal Ball. In 2008, a presidential year, Wittman defeated Democrat Bill Day by a narrower, but still substantial, 57%-42% margin. That same year, John McCain won the 1st CD, but with just 51% of the vote, to 48% for Barack Obama. So, clearly, this has been a Republican-leaning district, but far less in presidential years than in off-year elections.

Also worth noting, as Adam Cook points out in his interview on the flip, "this district isn't nearly as red as it used to be...the district also pushes significantly farther North than it used to, including roughly 40% of Prince William County. If the President does well in Virginia again this will be a competitive district in 2012."

Anyway, I was impressed with Adam Cook when I met him back in January. He struck me as serious, smart, thoughtful, and level headed. Same thing with the interview he conducted with me via email over the past week or so. Again, you can read the entire interview after the "fold," but a few highlights from my perspective include:

*His bio, which includes being the "son of a pastor;" a law school graduate who decided on 9/11 to "give something back" to our country by "join[ing] the Air Force as a Judge Advocate;" volunteering in 2010 "to deploy to Afghanistan in support of the mission at the central detention facility in the country...reviewing the evidence and intelligence concerning each of the roughly 3,000 Al Qaeda, Taliban and Haqqani network detainees in our custody." Impressive.
*His main reasons for deciding to run for Congress: a) "I was, and am, deeply offended by the Paul Ryan budget which makes roughly $5 trillion in cuts to services for seniors, students, veterans and the poor and turns them into $4 trillion in tax cuts for the wealthiest Americans and biggest corporations;" and b) while serving in Afghanistan, watching "a totally dysfunctional Congress unable to execute even the most basic functions of government, largely because we had a newly elected Republican majority in the house that was determined to use their newfound power to try to effectively repeal the 20th century."
*The fact that he's "proud to be a member of the party of working people, civil rights and equal rights for all Americans."

In 2005, the day he set up his elementary school classroom, Philip Forgit was called up for active duty. He spent the next year in Iraq. Winner of a National Education Association grant, he used that money and his own to fund his film: Lions of Babylon; A Soldier's Story.

What this film seems to be trying to answer is whether Iraq and America, Iraqis and Americans, are better off for the war. After an unsuccessful run for Congress as the Democratic candidate against Rob Wittman in Virginia's First District, Forgit turned to this project. Returning to Iraq during late 2009 and 2010 he recorded the efforts of U.S. and Iraqi troops to keep the peace in Saab al Bor on the outskirts of Baghdad. It focuses on a single troop in a single village but it is a microcosm of something much larger.

Forgit was an intelligence specialist in the navy reserve for 10 years. As such, in his assignment in Iraq he was immersed in the complexities of religion, tribal influences, trade and economic relationships. His perspective is shaped by his personal and professional relationships with Iraqis, both military and civilian. From that perspective, he believes most Americans do not fully comprehend the effect the war has had on themselves or the Iraqis. This is among his reasons for telling this story.

Apparently someone forgot to tell Rob Wittman that it isn't ok to use taxpayer dollars to prepare, publish and mail his political campaign materials. The "franking privilege" allow members of Congress to send "official mail," under their signature, without postage - although this sort of mail is not free as it is paid for by annual tax-funded appropriations. As Rob is no doubt aware, political campaign mailers do not fall under what is allowable as "official mail."

Additionally, congressmen are prohibited (Section 3210 (a)(6)(A), Title 39 U.S.C.) from sending out any mass mailings during the 90-days preceding the date of an election - be it primary or general. A mass mailing is defined as "an unsolicited mailing of 500 or more pieces of substantially identical content - whether mailed singly or in bulk - over the course of a legislative year."

Since the 90-day blackout period begun, Rob has not shied away from using taxpayer funds to send out what are clearly campaign mailers. Kandy Hilliard, Chair of the Stafford Democratic Committee, issued a press release this morning that accused him of misusing taxpayer funds for campaign expenses and called for a formal investigation to be launched.

Krystal Ball is dead wrong on the issue at the center of American strategic security interests. Her naïve, casual, pragmatic responses to complex questions and nervous laughter when she was being taken to task by her interviewer today made clear that she is neither ready for prime time nor Congress.

None of this makes Rob Wittman more qualified for office, mind you. But if Krystal Ball believes what she expressed in her discussion on the Tony Macrini show this morning, there is no compelling reason for progressives to think more than to vote for her on election day. She doesn't even list the war as an issue on her website. Shoe leather and money are better directed to a Tom Perriello who can think on his own and explain to his constituency why his positions are in their and the nation's interests.

Macrini went to the conflict in Southwest Asia in short order reasoning that people in Hampton Roads are more likely to be somehow directly affected than people who live in Idaho or elsewhere. He turned the discussion over to Ball after wondering aloud that, here we are with 4,500 Americans dead and $1 trillion spent, if the wars were a good idea. Most of the discussion of that issue follows.

I'd say that the Wittman campaign is feeling quite threatened these days by Krystal Ball's (D-VA-1st CD) candidacy that they felt that they needed to dismiss her as a candidate through an extremely sexist comment.

Great job by the Farm Team on calling them out!

Recently, a spokesperson for Congressman Rob Wittman of the 1st District of Virginia made a controversial statement about his opponent, Krystal Ball. In referring to Mrs. Ball, the Wittman campaign described her as "cute" stating, "As cute as our opponent may think she is..."

Today, Susan Platt, a founding member of The Farm Team said, "It is regrettable that Rob Wittman's campaign feels it is acceptable to degrade the Democratic Nominee for Congress for the First Congressional, who happens to be a woman, in such a manner."

Platt continued, "Krystal is running a smart, issue-oriented campaign and should be treated with respect.  Not only is it disrespectful to Mrs. Ball, but to the many other women across Virginia who expect more from their elected officials.  We hold our leaders to a higher standard.  That's why we're supporting Krystal Ball for Congress."

That's what constituents in the 1st District of Virginia are wondering. It's no wonder that his constituents have no idea who or where he is, since he has no legislative accomplishments to speak of and instead spends his time hobnobbing at GOP fundraisers and hanging out with his pal Eric Cantor (see Lap Dog article).