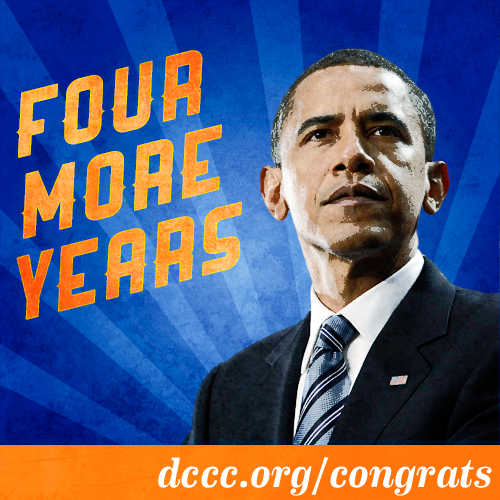 The polls are about to close on the Eastern United States.  At 7pm EST we'll see polls close in Virginia, South Carolina, Georgia, and across most (but not all) of Florida.  Virginia is of course, the first of the major swing states to close.  So, to start out the night the big question:  Are "you on your own" or we "all in this together"?

IF YOU ARE IN LINE, STAY IN LINE.  DO NOT LEAVE THE LINE!

*  "These arguments we have are a mark of our liberty."
*  "Our economy is recovering, a war is ending, and a long campaign is over. Whether I earned your vote or not, I have listened to your voice ... and I will return to the White House more determined than ever."
*  The President identifies his Second Term Agenda:  Deficit Reduction, Immigration Reform, Energy Independence.

Update 12:15:
Mitt Romney is disputing the election results in Ohio, but with the President's victory in Colorado this point is now moot.  With or without Ohio, President Obama has been reelected.

In an astonishing and pitiful move, the Romney campaign is disputing the Ohio result.  A fitting end to a truly despicable campaign.

How can we get Virginia Democrats even more psyched to support Tim Kaine?  Here's an idea: have Ayatollah General Cuccinelli abuse his office to make a cheap political attack on him.

Well, what do you know?  Wish for something hard enough and it happens.

Apparently George Allen and his cohorts have decided that they are not going to win the Senate race on current, relevant issues and so they have to resort to Willy Horton tactics.  Horton, for those too young to remember, was the killer George H.W. Bush blamed Mike Dukakis for releasing from prison in Bush's slimy 1988 campaign.

It's an appropriate reference, since Cuccinelli is dredging up documents and issues nearly as old.  In a NUTshell, they're trying to blame Kaine for trying to send a German murderer convicted in 1990, Jens Soering, to complete his prison term in Germany rather than Virginia.  Bob McDonnell more recently reversed this extradition agreement so that Virginia taxpayers can keep paying for this guy's incarceration.  (Lowell summarized the case in a bit more detail here

Senate fundraising numbers are out today, and while the fact is that neither Gov. Tim Kaine nor George Allen will be without adequate funds come November -- given the intense national interest in their race -- the early numbers clearly suggest that Gov. Kaine's campaign is generating some real enthusiasm among Democrats, while Allen's is showing itself to be a worn out effort touting a candidate without any new ideas and little to offer.

In the throes of a primary campaign, Allen's fundraising was pretty anemic.

Gov. Kaine announced $2.2 million in fundraising for the first quarter and he has more than $4.4 million cash on hand,- a nice showing at this point in the race.

Even more significant, however, is the fact that 6,000 new grassroots donors made contributions of $200 or less, bringing the total number of low-dollar donors to more than 14,000 overall.  This follows Kaine's submission last week of more than 30,000 signatures in support of his candidacy. In a federal campaign, where there are contribution limits, such broad grassroots support is essential.

Meanwhile, Allen announced only $1.4 million raised, with $2.66 million cash on hand. He provided no other data.

Bill Bolling Argues He CAN Vote on State Senate Organization Let's just say, something tells me that Virginia Senate Democrats are not going to agree with this! The key conclusions: 1) "Contrary to the Democrats allegations, there is nothing in the Constitution of Virginia that limits the Lieutenant Governor's ability to vote on organizational matters;" and 2) "However, I have further concluded that the Constitution of Virginia does limit the Lieutenant Governor's ability to vote on certain other matters." (e.g,  the budget, any bills to issue debt, and election of judges). We'll see you in court, Mr. Lieutenant Governor! :)

Earlier today I issued an advisory ruling regarding my ability to break tie votes on certain matters that may come before the Senate of Virginia during the upcoming legislative session.  I am writing to make you aware of that ruling and the reasons for it.

First, a bit of background information.

As a result of the November elections the Senate of Virginia now has 20 Republicans and 20 Democrats.  Because of this equal division my role as President of the Senate will take on added visibility and significance during the upcoming General Assembly session. I'm glad to see this; if nothing else, it's about time that the courts decided what the deal is with the powers of the Virginia LG vis-a-vis the Senate That shouldn't remain unresolved.

(Richmond, VA) Today, Virginia Senate Democratic Caucus Chair Donald McEachin filed suit in Richmond City Circuit Court, on behalf of the Senate Democratic caucus, to stop the Lt. Governor from breaking an expected tie this January when the Senate comes back into session and organizes for the next four years.

"The voters elected 20 Democrats and 20 Republicans to the Senate. Yet, in spite of that, the Republicans choose to ignore these results and, instead, claim absolute power and authority," said McEachin (D-Henrico). "This willingness to ignore the evenly divided results of the election is unfair and unacceptable."

"In Virginia, only an elected member of the Senate can vote on the rules of the Senate. The Lieutenant Governor was not elected to the Senate." said McEachin. "Unfortunately, the Republicans have not shown any inclination to work with us to resolve this impasse. In a 20-20 Senate, power should be shared, but, instead, the Republicans insist on an arrogant power grab."

Senator McEachin will be available to the press today from 1:30pm-2:00pm outside House Room D in the General Assembly Building - before the Joint Meeting of the House and Senate Commerce and Labor Committees.

Great move by the Virginia Senate Democrats. Now, do NOT back down to the Republicans' wild overreach (with lots more to come, I'm sure)! Thank you. :)

Richmond, VA - In one of the largest power grabs in modern Virginia history, Republicans are claiming a Senate majority they did not earn and also announced they would like to "re-visit" redistricting.  In response to the Republicans claiming the Lt. Governor has the authority to break a tie for re-organizing the Virginia Senate, Senate Democrats today announced they will file suit to force a ruling on the power of the Lt. Governor to break tie votes in a Senate that now has 20 Democrats and 20 Republicans.

"You would think after an extremely close election Republicans would come out with a plan that addresses jobs, education, transportation, and other issues facing Virginia families" said newly-elected Senate Democratic Caucus Chair Donald McEachin (D-Henrico).  "Instead, the first thing Senate Republicans do is claim a majority they do not have and announce their intention to re-draw Senate district lines. Republicans are showing us right now that their number one priority is the accumulation and exercise of political power for their own benefit."

Northam Hasn’t Wavered From the Issues

Honor distinguishes Doctor Ralph Northam's character. It was recognized early on by all with whom he came in contact; chosen by his fellow students at VMI to head the Honor Court: the classmate whose judgment they trusted most. His character is reflected in his campaign staff and his campaign.

Northam's opponent and the RPV have employed the common lowbrow attack strategy. The issues important to the district have never been at the center of the Republican's campaign. His opponent would be critically vulnerable to a negative strategy from the Northam camp. But Senator Northam (D-6th) did not fall to that temptation. And unlike others, who rue their 2009 strategies, he can walk away from this race, either way it goes, certain he has not violated his own personal standards and that he has run the best race possible.

"I am a huge Ralph Northam fan. I worked with Ralph when he ran and won his Senate race on 07. It was just an absolutely magnificent race. I think Ralph is one of the great public servants in Virginia." - Governor Tim Kaine

Anyone involved in the Senator's 2007 race, where he unseated a Republican incumbent, knows that his staff then, managed by Jon Blair, was as professional as they come. Jon went on to head up the successful 2008 race for New Mexico Congressional candidate Martin Heimrich. That same atmosphere is evident at his current campaign headquarters on Granby Street in Norfolk. On a recent visit, the phone rang and a volunteer answered, then asked, "Is there anyone here who can talk to a man about menhaden?" And every campaign staff member raised their hand. It isn't often that they have to reach for Northam's legislative assistant, Matt Strickler. All of them know the district and the issues far better than Northam's opponent. Ralph surrounds himself with class and competence.
1234Page 3 of 4