Whoa, amazingly good news for a change (see Dominion’s press release, below)!  I just wanted to break the news for now…will provide further thoughts later, but this is superb news, as this pipeline was a massive boondoggle, a big-time polluter, and completely stupid all around. Oh, and of course great work by all the attorneys, activists, etc. who fought the Atlantic Coast Pipeline (ACP) for the past few years! Also worth noting is that this is a perfect example of what can happen when you “think globally, act locally.” In this case, the “think globally” part was the climate crisis, and the “act locally” part was working to slow this thing down, make it as costly as possible, and ultimately force Dominion to cave. Which, amazingly, they did. Amazing…one pipeline (ACP) down, one more (Mountain Valley Pipeline, MVP) to go!

Dominion Energy (NYSE: D) and Duke Energy (NYSE: DUK) today announced the cancelation of the Atlantic Coast Pipeline (“ACP”) due to ongoing delays and increasing cost uncertainty which threaten the economic viability of the project.

Despite last month’s overwhelming 7-2 victory at the United States Supreme Court, which vindicated the project and decisions made by permitting agencies, recent developments have created an unacceptable layer of uncertainty and anticipated delays for ACP.

Specifically, the decision of the United States District Court for the District of Montana overturning long-standing federal permit authority for waterbody and wetland crossings (Nationwide Permit 12), followed by a Ninth Circuit ruling on May 28 indicating an appeal is not likely to be successful, are new and serious challenges. The potential for a Supreme Court stay of the district court’s injunction would not ultimately change the judicial venue for appeal nor decrease the uncertainty associated with an eventual ruling. The Montana district court decision is also likely to prompt similar challenges in other Circuits related to permits issued under the nationwide program including for ACP.

This new information and litigation risk, among other continuing execution risks, make the project too uncertain to justify investing more shareholder capital. For example, a productive tree-felling season this winter is a key milestone to maintaining the project’s cost and schedule. Unfortunately, the inability to predict with confidence the outcome of the project’s permits and the potential for additional incremental delays associated with continued legal challenges, means that committing millions of dollars of additional investment for tree-felling and subsequent ramp up for full construction is no longer a prudent use of shareholder capital.

A series of legal challenges to the project’s federal and state permits has caused significant project cost increases and timing delays. These lawsuits and decisions have sought to dramatically rewrite decades of permitting and legal precedent including as implemented by presidential administrations of both political parties. As a result, recent public guidance of project cost has increased to $8 billion from the original estimate of $4.5 to $5.0 billion. In addition, the most recent public estimate of commercial in-service in early 2022 represents a nearly three-and- a-half-year delay with uncertainty remaining.

“We regret that we will be unable to complete the Atlantic Coast Pipeline. For almost six years we have worked diligently and invested billions of dollars to complete the project and deliver the much-needed infrastructure to our customers and communities. Throughout we have engaged extensively with and incorporated feedback from local communities, labor and industrial leaders, government and permitting agencies, environmental interests and social justice organizations. We express sincere appreciation for the tireless efforts and important contributions made by all who were involved in this essential project. This announcement reflects the increasing legal uncertainty that overhangs large-scale energy and industrial infrastructure development in the United States. Until these issues are resolved, the ability to satisfy the country’s energy needs will be significantly challenged.”

The Atlantic Coast Pipeline was initially announced in 2014 in response to a lack of energy supply and delivery diversification for millions of families, businesses, schools, and national defense installations across North Carolina and Virginia. Robust demand for the project is driven by the regional retirement of coal-fired electric generation in favor of environmentally superior, lower cost natural gas-fired generation combined with widespread growing demand for residential, commercial, defense, and industrial applications of low-cost and low-emitting natural gas. Those needs are as real today as they were at project inception as evidenced by the recently renewed customer subscription of approximately 90 percent of the project’s capacity. The project was also expected to create thousands of construction jobs and millions of dollars in tax revenue for local communities across West Virginia, Virginia and North Carolina.

The companies remain steadfast in the belief that fuel diversity, including renewables, nuclear, and natural gas, is critical for reliably and sustainably serving our customers and communities. Both will continue aggressively pursuing the development of renewables, storage, nuclear license renewals, electric vehicle infrastructure, energy delivery infrastructure, as well as energy efficiency and demand side management programs to meet their customers’ needs while creating jobs and spurring new business growth in the aforementioned regions.

Dominion Energy and Duke Energy will separately provide additional information for their respective stakeholders and shareholders as relates to the company-specific financial, environmental, operational, and other impacts of this announcement.

UPDATE: This is also big news, of course…Dominion emphasizing a “focus on its premier state-regulated, sustainability-focused utilities that operate in some of the most attractive regions in the country.” 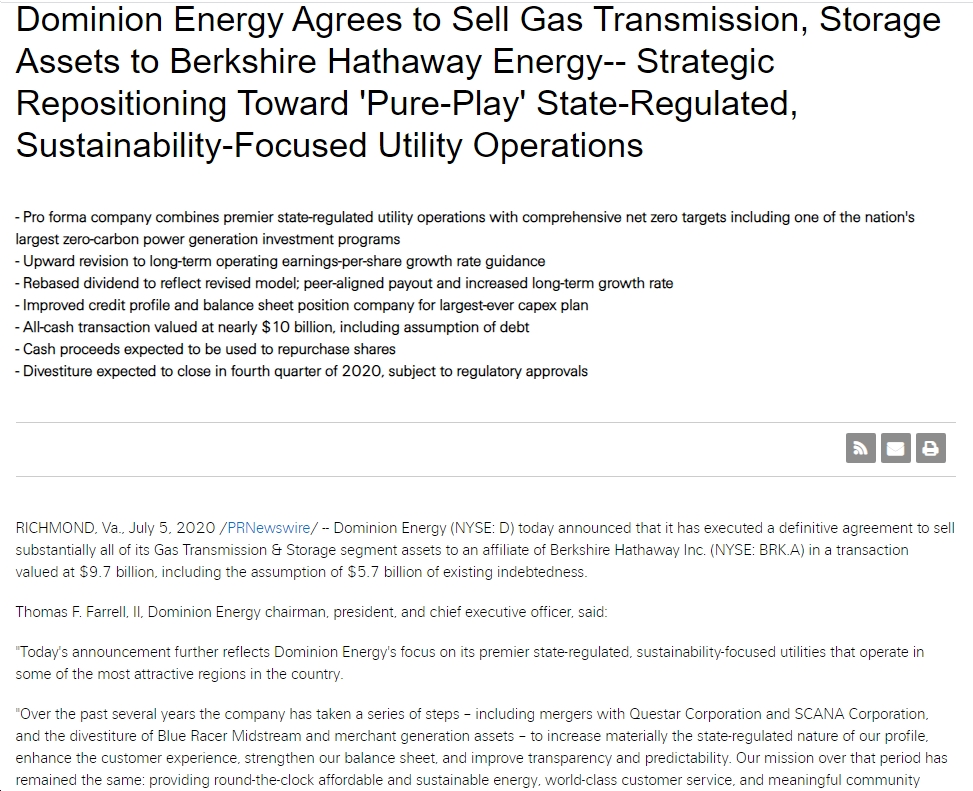 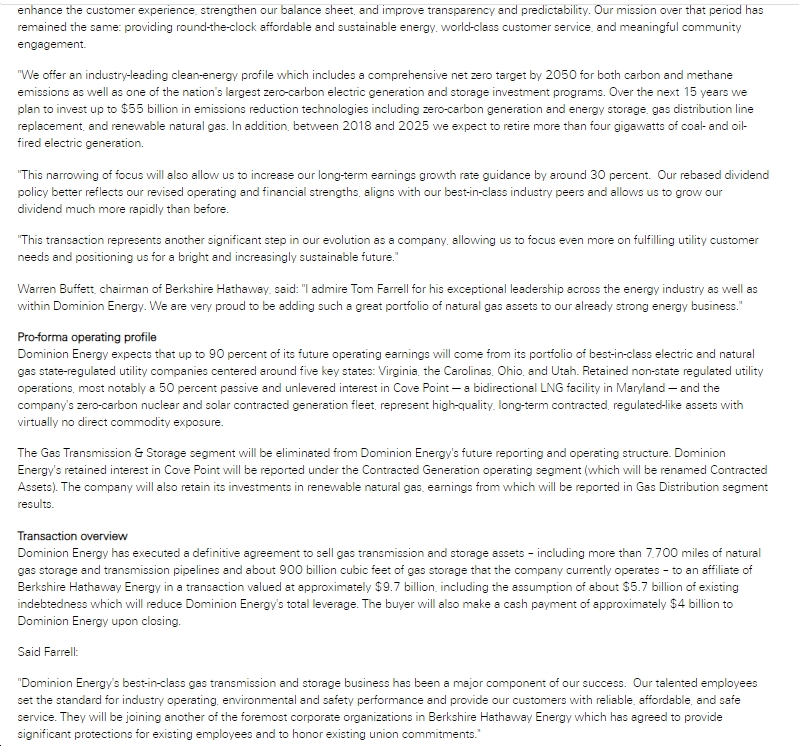