Far-right Virginia State Senator Amanda Chase (R), a candidate for governor in 2021, has a history of bizarre, nonsensical and outlandish comments. That includes attacking Harrisonburg small business owners the other day for telling her, correctly, that she need to war a mask in their restaurant. Also, recently, Chase promised to set up a 1-800 number so people can call and report public colleges and universities for “indoctrinating our kids” and for “social engineering bullcrap.” Back in late June, she declared that she doesn’t “do COVID anymore.” She also ranted that people would be “so triggered” if we had a “white history month” or “white legislative caucus.” And she’s said stuff like “It’s those who are naive and unprepared that end up raped” and that “The ERA Amendment is nothing more than a ploy by the left to eliminate gender altogether.”  In sum, the woman’s nuttier than a porta potty at a peanut festival. Heck, even Trump’s 2016 Virginia chair the other day said that Chase “is an unelectable candidate…she’s said things in her past that are…borderline racist,” that “If Amanda Chase is the nominee…[she] will get annihilated by any Democrat,” etc.

So with that background, check out Chase’s latest drooling idiocy – namely, that the shooting of a military helicopter as it flew near Middleburg early Monday afternoon – an incident that is being investigated by the FBI’s Washington Field Office, along with the Air Force Office of Special Investigations and “law enforcement partners” – somehow requires Amanda Chase to be elected governor and to have “absolutely zero tolerance” of such incidents if and when she’s in charge. Oh, and it supposedly means that we “need a return to law and order in the Commonwealth,” because apparently one bizarre incident in a state of 8 million people means that law and order have utterly collapse in Virginia. Heh. Also, is there any indication that there’s any “tolerance” for this type of thing? As Brandon Jarvis snarkily inquires on Twitter, in response to Chase, “Did Governor Northam tolerate this and I missed it?”

The responses to Chase on social media so far have been very amusing. Here’s a short sampling. 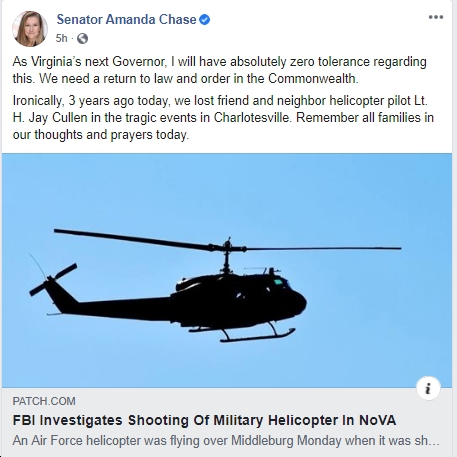 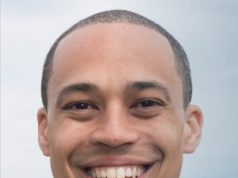