See below for a press release from the Pete Snyder for Governor campaign, in which the far-right Republican announces that he raised $6.4 million “during the first two months of his campaign.” Now, one might ask why someone needs that kind of money to run in an “unassembled convention” where a few hundred, or maybe a few thousand, Republican delegates will participate. But regardless, what this shows is that Snyder – if he’s the 2021 Republican gubernatorial nominee – is not going to have any problems raising $$$.  For comparison purposes, the fundraising leader among Democratic gubernatorial candidates, Terry McAuliffe, raised $5.8 million in the most recent reporting period, while runner-up Jennifer Carroll Foy raised $1.1 million. We’ll see how much money Snyder’s rivals – including Glenn Youngkin, who is very wealthy, and Kirk Cox, who seems to be the frontrunner at this point but isn’t personally wealthy – raise, but obviously Snyder isn’t going to lose because he lacks money… 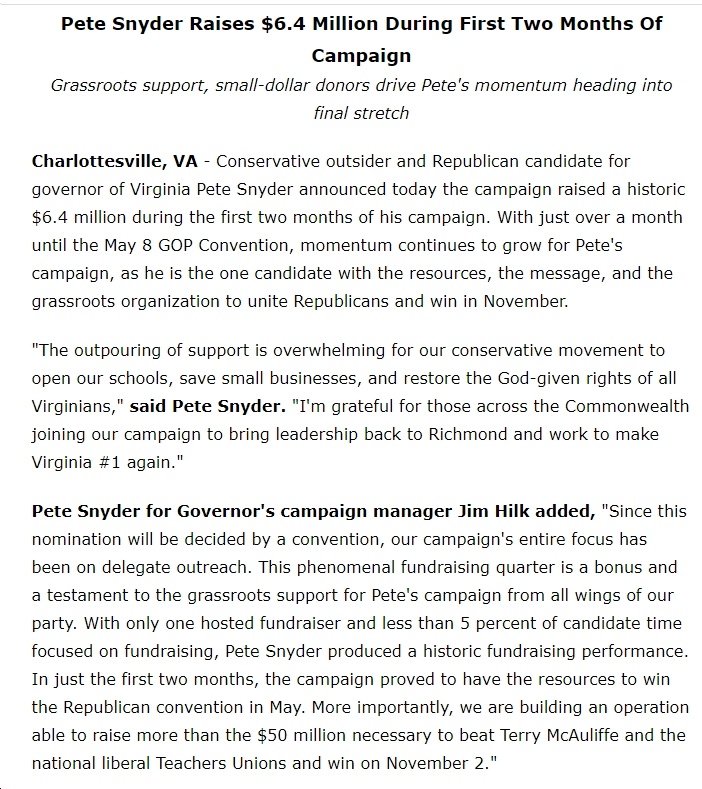 Hala Ayala For LG on Winsome Sears “doubl[ing] down on her extreme views and join[ing] ‘Audit the Vote’ protesters outside of the State Capitol...