UPDATE 3:17 pm – I wrote the following post prior to receiving a very strong statement from Clean Virginia (see the bottom of this post), stating that “Clean Virginia unequivocally condemns [Amanda Chase’s] rhetoric and actions in support of white supremacy” and “will no longer contribute to Senator Chase’s candidacy for any office.” Nice! (but…see the next update)

UPDATE 4:30 pm – Now, hopefully Clean Virginia will do the same for LaRock, who in many ways is just as heinous as Chase…and, of course, never ally with someone as horrible (rabidly xenophobic, etc.) as Ken Cuccinelli again. It also remains confusing as to why Clean Virginia wouldn’t have known about Chase’s VERY public, frequent, LOUD ranting about “white history,” etc., prior to donating to her…or why they wouldn’t look into her record before doing so, and run screaming in the opposite direction!

Since 2018, the group Clean Virginia has emerged as a major force in Virginia politics, donating $806k to Virginia candidates — overwhelmingly ($788k) to Democrats, with a much smaller amount ($17.5k) to Republicans. Also, Clean Virginia’s funder and founder, Michael Bills, has donated large amounts of money the past few years, overwhelmingly to Virginia Democratic candidates. As for the organization, overwhelmingly it does excellent work – “works to fight corruption in Virginia politics in order to promote clean energy, a robust, competitive economy, and community control over our energy policy. We are motivated by the core belief that our democracy should serve average Virginians over special interests.”

So that’s all great stuff – it truly is! And I truly hope they keep doing this important work – fighting Dominion’s negative influence on Virginia, pushing for clean energy, etc. –  for years to come! Also, it’s important to note that I very much like and respect Clean Virginia’s executive director, Brennan Gilmore, who has been a hero in many ways, including fighting back against the likes of Alex Jones and “online tormenters” after the “Unite the Right” rally of white supremacists in Charlottesville on August 12, 2017.

All of which makes me even more puzzled that Clean Virginia would donate money – even if it’s a small fraction of the overall money they give – to extremists like State Sen. Amanda Chase (R) and Del. Dave LaRock (R). Why do I say this? Not because Chase and LaRock are Republicans, per se, and not because there’s anything wrong with donating money to people who agree with you, but…shouldn’t there be *some* guardrails?

For instance, let’s say you support public education, so you donate to politicians who support public education. Perfectly fine. But what if one of those politicians happens to be a raving bigot, xenophobe, homophobe, etc. while simultaneously supporting public education (yes, people can be complicated)? Do you still give money to them, simply because you’re focused on “your issue” and trying to build alliances, even with people you would otherwise find odious? Or do you NOT give them money, because as much as you appreciate their support on public education, you simply refuse to give money to a bigot, xenophobe, etc…particularly because you have no control over what message they choose to amplify with their money? Personally, I’d strongly recommend the latter option, and in general recommend that groups put up strict guardrails, so that even if someone agrees with you 100% on “your issue,” you still won’t support them because they’re just too antithetical to your values in other ways.

Which brings us back to Clean Virginia, and specifically to their donations to Amanda Chase and Dave LaRock. See below for the tweet by Democratic political consultant Thomas Bowman that alerted a bunch of people to this earlier today, as well as a response by VA Dems’ Executive Director Andrew Whitley. And I say “a bunch of people,” because several of them contacted me, outraged, *urging* me to write something on this. 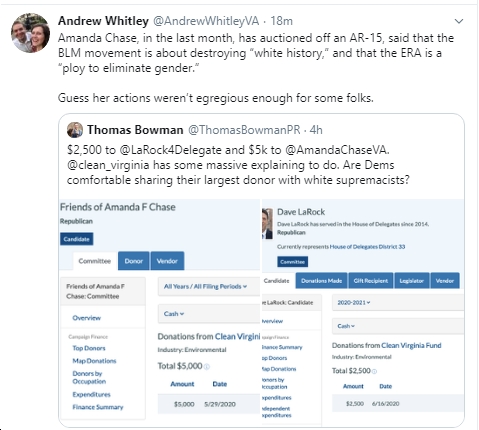 So…$5k to Chase and $2,500 to LaRock in recent donations (note: Clean Virginia gave to Chase previously as well…$5k in October 2019, when Chase was running against Democrat Amanda Pohl for reelection to the State Senate)? What’s so bad about that, you ask? Just in case you haven’t been following these folks, here’s some background, so you can judge for yourself.

Bottom line: Clean Virginia does a lot of great work, and donates overwhelmingly to Democrats, which is all excellent. It also is understandable that Clean Virginia would donate to Republicans IF the Republicans agree with Clean Virginia’s stated policy objectives (“fight corruption in Virginia politics in order to promote clean energy, a robust, competitive economy, and community control over our energy policy”).  The problem, of course, is that almost no Virginia Republicans agree with those things, which presumably is why Clean Virginia gives overwhelmingly to Democrats.  In the cases of Chase and LaRock, clearly they do NOT support clean energy, nor do they support “community control over our energy policy.” But beyond that, they shouldn’t get a penny from any progressive or environmental organization simply because their views are far, far outside the mainstream of acceptable political discourse. Or, at least, they *should* be considered far outside the mainstream…

UPDATE: I reached out to Clean Virginia to see if they had any comment. They sent me the following, very strong statement (bolding added by me for emphasis).

“Clean Virginia was founded to combat corrupt and undue utility monopoly influence in Virginia’s energy sector. As an essential part of that mission, we provide no-strings-attached funding to any member of the General Assembly, irrespective of party or politics, who has a principled stance against taking contributions from and owning stock in the utility monopolies they regulate. As Senator Chase holds this position, Clean Virginia contributed to her State Senate candidacy for the past two years. However, her divisive and dangerous response to the nationwide calls for racial justice is simply unacceptable and in direct opposition to Clean Virginia’s values. Clean Virginia unequivocally condemns her rhetoric and actions in support of white supremacy. In response to these actions, which followed our 2020 General Assembly giving cycle, we will no longer contribute to Senator Chase’s candidacy for any office, including Senator or Governor. Indeed, if we had been more attuned to her statements made during this year’s General Assembly session we would not have made a standard annual contribution. ” – Brennan Gilmore, Clean Virginia Executive Director

Background: Clean Virginia Fund, Clean Virginia’s Political Action Committee, operates with a transparent, predictable giving policy for the General Assembly: Clean Virginia Fund will donate $2,500 and $5,000 a year to House Delegate or State Senator candidates or incumbents, respectively, if they refuse contributions from Virginia’s regulated utility monopolies (i.e., Dominion Energy and Appalachian Power Company) and their employed registered lobbyists and do not own stock in those corporations. This policy means that we support legislators from both parties and a wide variety of political viewpoints, and often may not agree with these legislators on issues beyond the scope of having a principled stance against accepting money from the utilities they regulate.